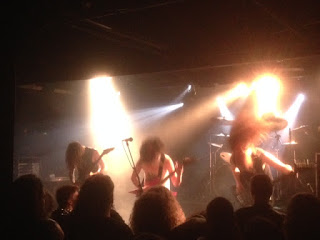 Originally I was planning to go this Sunday to some retro Hardrock of Horisont and 77, but a late start on a Sunday evening some two hours driving from home made me change my mind. Baroeg was having a Death Metal afternoon/early evening session. Apart from the timing, Blood Incantation on bandcamp already triggered my interest as well. Turned out that my choice was a good one, although I shall never know what I missed in Helmond. As Baroeg is a stone throw away from de Kuip and this Sunday Feyenoord guaranteed their first title  in 18 years, with two local bands on the line-up Football was never far away. Although in spite of the bands references the audience did not seem to bother all that much. 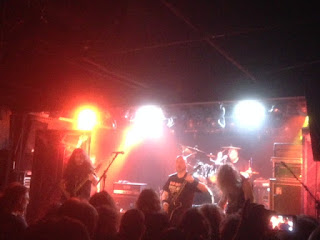 Graceless was the opening band of the afternoon, but they already finished before I arrived. As I am hardly a specialist in Death Metal I keep my comments short on the four bands who all had something different to offer. Neocaesar contains ex members of Sinister and played straight Death Metal with a good groove. Cruciamentum from England got my interest with the constant flow of guitar melodies over some very heavy death metal. Song announcements were grunted at us in similar vein of the vocals during the songs and this resulted for me some fast flying 40 minutes. Thanatos is an institute of extreme metal in Holland. Exisiting 33 years by now shows on stage. This was a very professional Death/Thrash metal show that hit us. Turned out that this was also drummer Yuri's last show. They will continue, but when and how is to be defined. Closer of the now evening were Blood Incantation. I knew this name from the announcement as their logo is hilarious (hallo Mikado). Last year they released well received Starspawn, which was now base for their set. This band was something different from the other bands today as well as all bands I ever saw. They somehow mix brutal death metal with the technical ambient side. Never coming close to clean singing, they include breaks by instrumental slowing down. All this very short as the main body is just extremely heavy. Best gig of the day to me, although all four bands justified the trip.
Posted by erikprogtricolor at 20:50