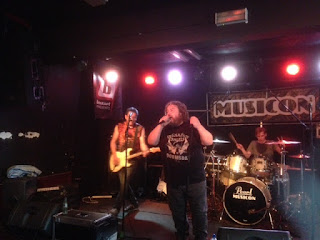 Loyal followers of my blog (and I know who you four are!) might remember that I voted Trespass in the Quay as my favorite show of 2015. Now I think that you can't compare shows really, but the whole trip, receipt at the venue and pub-tour afterwards made that a very special weekend. When I read some months ago that The Deep would be playing Musicon the day after Headbangers Open Air  I managed to get Trespass in contact with THHMA and they were added to the gig. As with work at a low and travelling reduced I can now also plan in advance and start giving something back to the music that I love for 50 years now. Thus Trespass stayed at my place and earlier ideas of starting a Poussada in Brazil could be put into practice/training. So this always was going to be a special gig and after taking Tiago to see Iron Maiden during our holidays he now joined with Iwan to see what a show in Musicon is all about. 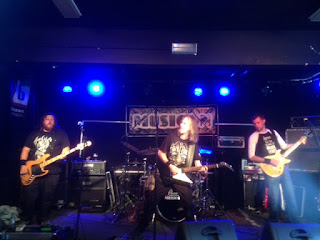 Trespass was the first band to play and they opened with Jealousy. As the new album Footprint in Rock is now to be mixed several songs from that one were played as well. To me they blended in well with the old songs. Last year Trespass was still with five members, now they are four. Loosing one guitar did not stop the switching between the solo's and I still could recognize the typical Trespass sound also in the new songs. As highlights tend to come in songs you know, for me Bright Lights was definitely one of them. We knew that it was over when One of these Days started. Again played in a great version, with the melodic solo at start and finish. This song should have made them a household name, but it did not happen then, nor will it happen now all of a sudden I'm afraid. This was the first time ever they played Holland and I guess more shall follow even if the crowd was somewhat disappointing small. 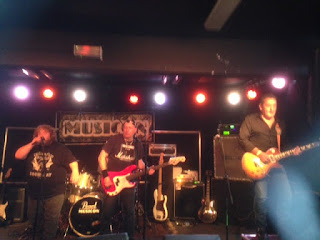 This review might look a bit biased towards the Trespass gig, but I definitely came to see The Deep as well When starting their set two things were clear. Tony Coldham has a huge vocal range and The Deep adds a nice power to their metal. Most (all?) songs came from the excelent debut album Premonition. Not following the order of the CD though. Amongst the highlights the title track and Spellbound. The Deep were very enthusiastic on stage and this transported back into Musicon nicely. In two weeks time they play the already legendary Mearfest 4 and I am looking forward to see this show again. Got the Tee in appreciation and hope more music is coming from them in the future. 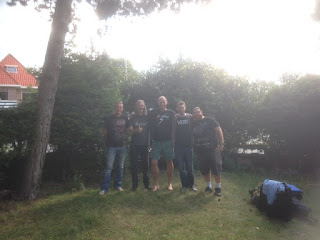 Returning home in the van with Trespass it was nice to hear their views on music and touring. Very nice guys they are, they did not even charge me for having a meet and greet at Breakfast. Looking very much forward to their Footprint in Rock.