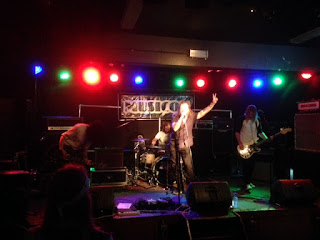 D&ESR putting four to me unknown bands in Musicon, With the internet as my guide I listened to some sound clips and found all four potentially could be interesting, so Hello again Musicon it was. Originally this were to be three bands, but Pendejo!'s gig at another venue in The Hague was cancelled, giving them the chance to be added to the bill. Especially this band got my attention as they have something very own to them. Being a dutch band, due to some latino roots of members they sing in Spanish and also use the not so common trumpet to spice up their heavy rock. As they would open the evening all reasons not to arrive late and I can be short, they blew me away with their live show. This was very energetic rock, with a latino vibe to which the latino in me strongly related. I might look very dutch to many, but I am a Carioca by heart and Spanish is just one step away from Portuguese so I could get their comments on mulheres con muchas curvas. This show strongly reminded me of Tarantino movies as well. Picture a psychopath lost in the desert walking into a small steaming hot town entering the saloon. There Pendejo! is playing, with the mad vocalist getting his gun out to shoot some punters who got into a fight. The good thing is, that if Tarantino ever wants to use this story line, the band is perfectly cast for the role. The music was good, the atmosphere from the stage great and the trumpet gave the evil haunting background for what would be a show impossible to top by the other three bands. Got their two fair priced CD's (as Rene put, for listening once and then archiving) and know I shall keep an eye on their future touring schedule. 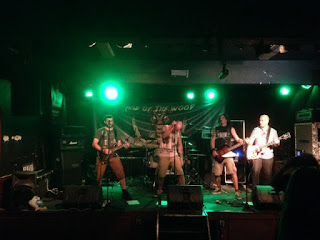 To Dead Wizards the impossible task to follow this one up. As they are from the area they brought some local support along and actually did quite well. If there was to be a probem, to me it was the lack of a singer. Although good instrumentalists, the show did not offer the variation Vircator for example offered some months ago. I guess a second guitarist or a vocalist can help. Now the band played well, but did not once say something like a song title or introducing the band. Decent show though. Next on stage were Rise of the Wood, who brought a huge banner and some home fans as well. This band plays stoner metal, while I heard also much of Soundgarden mixed in. This mainly due to vocals who were not very far from a poor man's Chris Cornell. This band brought energy back on stage and is basically a very nice band to add to this bill. Enough metal in their music and their anthem "Hell Yeah" has an invitation to shout along in it. They covered a Red Fang song, but as I do not know music from that band nothing changed which might say something of the level of their own songs. Headliner of the evening were Obese from Utrecht. Their music was described as fat/stoner/sludge/doom. In theory this might have been the best band, but for reasons I can not put the finger on their songs did very little to me. They were heavy (fat) stonering and doomish, but I did not get the spark and even decided shortly before they finished to call it quits as our summer has finally arrived and summer evenings started taking their toll. Thanks to Paul and Benjamin for getting this evening together, I can look back at one brilliant show and some good followers thereafter. 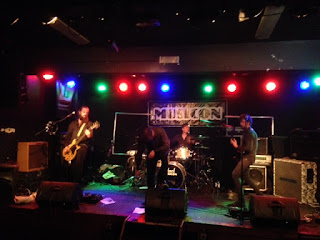