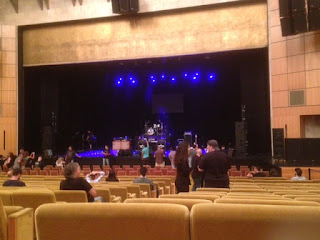 Now that with every next visit to Lisbon it seems more that we might end up there permanently one day, it is about time to start discovering some places with live shows. This holiday would start and end in Lisbon and checking up agenda's my main interest was in RCA club on 8 July. I am curious to see if this place is more Lisbon's answer to Baroeg (metal!) or de Boerderij (general!) as programming takes bits of both. Earlier this year I missed Gama Bomb by one day and now Lux Ferre played on the night we arrived and had visitors for dinner. So discovering three local black metal bands in RCA stays for later and I went to plan B. Steve Vai in CCB. Now CCB is a theater and as far from a rock club as you can imagine. Personally I am not a great fan of theaters where drinks are not allowed and you are stuck in your numbered seat. Further given the average size of a Portuguese a Dutchman of 6'66" is bound to get uncomfortable at some point. Looking at the audience was another interesting passing of time, as there really was no average to be found. There were black T-shirted rockers, but also people who dressed up better than I did at any wedding I attended (and I suit up if demanded). It felt somewhat strange seeing a show next to a guy in white trousers, but I must admit the overall atmosphere was great against all the odds of the setting.

Regarding the show Steve is touring his Passion and Warfare album 25th birthday and playing it in full. This is the only solo album I have from him on CD. In his case I like the albums he did in Classic Hard Rock bands better: Alcatrazz - Disturbing the Peace, David Lee Roth first two albums and Whitesnake's Slip of the Tongue. In the eighties many guitar heroes came up releasing full instrumental albums. This followed the older heroes like Schenker, Gary Moore and Blackmore. My favorites at the time were Marty Friedman and Jason Becker both solo as well as together in Cacophony. But seeing any of those guitarists live is just a matter of gazing in awe and wondering how does he do that?!? Steve Vai coming up with red lasered glasses in the dark immediatelly started of letting his guitar speak and giving us wonderful melodies. I do not know much of his work and to make matters easier he did not say a word the first 25 minutes. Still he asked for audience participation with arms and expressions. On the background some nice clips added to the show and after a while the full album playing was announced. During the album some videoclips from the early nineties were shown and Steve Vai represented hair metal nicely. Highlights were clips of Satriani and Petrucci, both leading to live jams with a video. At the end some songs followed including one written with help of the audience, which dragged on a bit too long I thought. One more show of complete sorcery on the guitar and we could go home amazed.

While at first the location somewhat disappointed, the show was beautiful and the Portuguese turned out to be a loud crowd. The big guy I saw jogging in the afternoon after buying a ticket and visiting the museum at CCB turned out to be the drummer, glad he survived the 35 degree jog. Upon request of artist or theater no photo's were to be taken. This request was without a chance and gave as extra dimension the girls running through the lanes torching people filming or picturing the show.  Personally if requested by an artist I like to accept such request and see pictures elsewhere. Therefore I close with a picture of my two monsters on rocks. Did I already mention that Portugal is great for holidays? 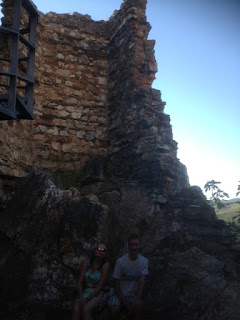