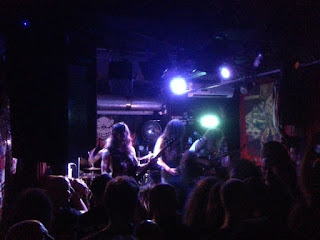 Vektor in a sold out Little Devil, was one of those shows I knew I should not miss. This year they released in Terminal Redux a strong candidate for album of the year to me. When they announced that during this tour on non festival dates the album would be played in full, I only became more curious how they would pull this off live. Before they were on Villainy from Holland would open the evening. I can say they did so very well. They looked thrashy at start, but also had doom and long instrumental spacy bits included. As they had some 45 minutes, no time was wasted on introducing songs or band, just playing as many songs as would fit in. Actually if not for the packed Little Devil and the surprising end of the evening I might have checked out a CD. Shall leave this for next time I see them now. 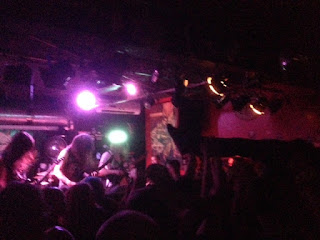 A sold out Little Devil, means a full house indeed. I decided to stay at the break tugged in my corner at the bar, hearing from Christian the latest news and ideas on Progpower. When Vektor hit the stage we noticed that the guy walking around in a Watchtower T-shirt was actually the bass player, so nothing wrong with their historical awareness. The band kicked off with Charging the Void and indeed the full album was to follow. After the first song one discussion was ended to me. Nowadays many people get worried on the future of festivals and what shall happen when all the headliners from the eighties stop touring. Any festival in the future looking for a thrash metal band to close, Vektor is your band. They attract both a younger crowd and my generation who might be reminded of the bands like Toxik at times.To me everything sounded right and the speed at which Vektor go through their riffs, solo's and songs is just amazing. The band seemed to be at ease with this astonishing display of power and Little Devil reacted accordingly. There was a remarkable positive vibe in the air and circle pits and crowd servers were handled as well humoured as the beers were ordered with assistance of the people sitting on the bar for better sight. It felt like everyone realized we were seeing something special in the future of metal. The CD was played in order of the album so in spite of a cry for Black Future no surprises were included. Close to the end Vektor also showed that ballad Collapse could be delivered with class and then the grand finale was announced in Recharging the Void. After a blastering first five minutes I was curiously waiting for the break to the Pink Floyd bit, when all went dark. Little Devil could not have so much display of power and all went black. We got a drum solo, some Vektor shouts, request for acapella finish and another drum solo, but the power did not come back. This band deserved a better ending, but as the vibe was good all understood this was beyond the band and under loud applause they left the stage. I am already looking forward to a next show. Afer this selling out they should move to bigger venues and we might get an overview of their three albums then. Vektor rulezzz !!! 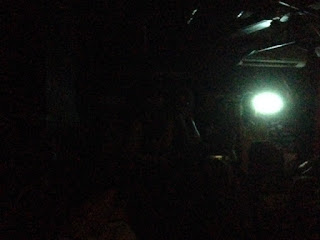