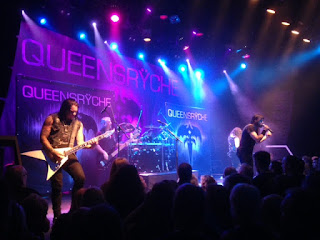 Now that the battle is over Queensryche found their rhythm again and returns to Europe each year for a tour reliving the past. As big a surprise as when we saw them first with Todd La Torre on vocals (Effenaar) won't happen again. Yet the question now remains if Queensryche would change their set for renewed old favorites. Before we would get the answer to that question we first had two openers warming us up. 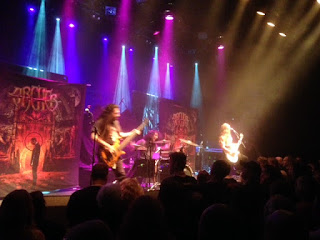 Methodica from Italy opened the evening. They reminded most of the lighter progpower bands, playing a heavy prog rock. They sounded OK, but the songs did not stuck in my head at first listen. The rather reduced stage also did not allow them to walk around too much. Still they got enough reactions from the audience and were appreciated by many. Next on were Archer Nation from the US who defintely looked more metal to start with. Looks did not deceive, as when they started we got a pure Heavy Metal show upon us. Vocals reminded Hans of Dave Mustaine, which was true at times. Listening to their CD now I also recognize sounds of more recent British metal bands like Savage Messiah or Absolva. The better warmer up to me and a band to keep an eye on. Sad and strange to see that both support acts sold T-shirts for a stunning Eur 30. I guess Queensryche policies do not allow them to charge a price more fitting their status and fame. I passed now and I guess I was not the only one. 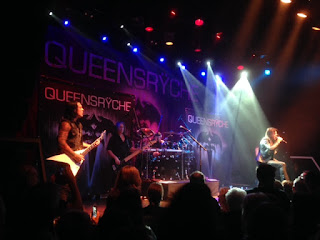 A sold out Boerderij then waited for Queensryche. This selling out caught several of us by surprise as last year in Amsterdam together with Armored Saint Melkweg was only half full. Last year also Todd suffered a cold and had to reduce the set, fighting through it the best he could. Maybe referring to that evening Best I Can was one of the surprising songs in the set. So Yes Queensryche did go through their past and made us happy with Damaged, The Mission and Screaming in Digital. It is the songs you do not expect that make you happy, next to fastest rocker Queen of the Reich. It all sounded very much like back to 1988. The band seems to be happy on stage again and in nothing reminds of the strange atmosphere hanging in the air one hot evening in Sao Paulo 2012. Still I have two tips for making this show legendary. First play longer: 75 minutes really is not a long set with so many classics to share. Further swap some songs that are the biggest hits, but far from my favorites. So I say out go Jet City Woman, Silent Lucidity and Empire. Strong substitues shall be I Am I, London, Anybody Listening?, Blinded and Before the Storm. As overwhelming as their shows were in the eighties it can never turn again. Still Queensryche delivers an evening of top level Heavy Metal looking as if they can go on for years. Hope they do so.