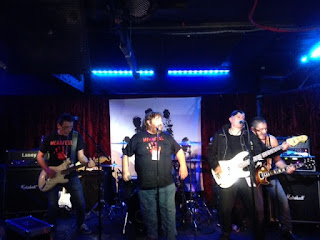 When I first heard of Mearfest 4 I knew this was going to be special. A NWOBHM Charity event in aid of the Willow Support Group for still born babies. People react different to disasters in their personal life's, but the way Brain and Claire Mear turned their loss of Molly into legacy inspires and asks for respect. I suggest reading of Molly's story on the Mearfest.com site for understanding a bit of the emotions behind such loss. Our Molly was called Taina and she would be a beautiful (if pushing her mom) 12 year old now. We experienced also the unprepared hospital, to deal with such a loss on a department where other babies are born. Combining this story with the fact that 6 NWOBHM bands would play I had to either go and see or just donate. Choosing the better option I arrived just after five at The Borderline a dark cellar with a bar and a stage, the perfect setting for this event. 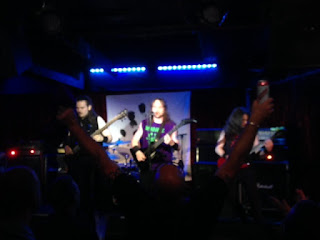 Starting of matters were Not Fit For Humans. This was not a Metal band really, but they covered Priest. Kaine got things really going musically. Being announced as Britains hope for Heavy Metal I can agree to that as being one of Britain's hopes. Their metal was mostly fast with two guitars in traditional style adding the spices. They are playing a lot in The Rock Den, while I hope they can follow  similar young bands like Toledo Steel or Monument and make it over to the low countries one day. Next on were Troyen and looking at the band they might be still in original Line-up. I did not know them 35 years ago and they turned out to play a NWOBHR as their metal was a heavy rock. Some songs sounding rather good but fairly mild after Kaine's thunderstorm we just reovered from. Sacrilege followed and the music turned heavy. Mixing their faster songs with the more Sabbath like heavy rockers I very much enjoyed their show. I did see them at Power & Glory two years ago, but was then recovering in between shows. Now they were more to my liking with the drumming devil. As the vocalist already mentioned their songtitles were highly inappropiate for the event, but I guess Journey was not within charity budgets .Sacrilege still do have the most striking basic Tees of the day as well. 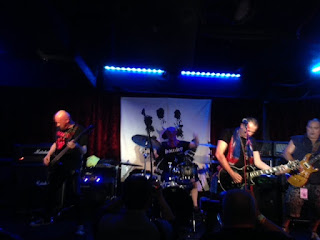 Then came The Deep, whom I say in The Hague just two weeks before. Expecting the same set, they opened upon request of Brian and Claire with The Sound of Silence. If there was a most emotional moment of the day, this was to be it and the great voice of Tony Coldham did so much justice to the occassion. Hereafter the set was completed with songs from Premonition. Seeing them twice in a row now, I do realize how good that album is and what a great live band. For me the best band of the day and pleased to see them in a full house now. Ater the raffle where I came awfully close, but did not win anything that would have caused me handluggage problems at Easyjet, Desolation Angles were closing the evening. I have their EP Sweeter the Meat, but recognized to my surprise on stage the vocalist of Midnight Messiah. They were a worthy closer of the day, with a good set of old songs. Only missed the title song of the EP, which might have been caused by tight time schedules. 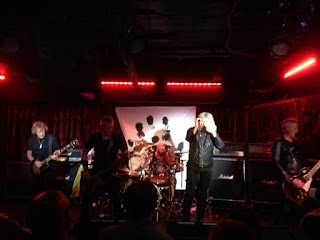 During the day I did ran into several known people and faces. While I expected the Rock Den crowd, the bigger surprise to them and me was running into Progpower's Mario and Luigi this time in civilian outfit though. Dealer should play The Hague next year and Martyn Turner takes some good pictures. Thanks to Brian and Claire for organizing this day. Next year a follow up is in the plans and I shall make an effort to be there again.