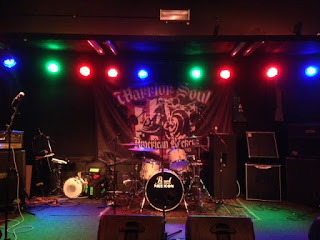 Warrior Soul in Musicon, that is one of those surprises when reading it at first, followed by a smile and a note to self: should not miss. Warrior Sould were some 25 years ago close to breaking big. I remember seeing them with Metallica and Dio in Leiden, as well on an Aardschokdag with Riverdogs and Dream Theater. They played energetic Rock and Roll with attitude and lyrics coming close to Punk and next to that they produced some of the best rock ballads ever (The Golden Shore!!). I don't know if we can blame grunge/nu-metal as well for their demise, but to me they disappeared of the radar somewhere in the nineties. Musicon was far from fully packed, but a decent turnout and in Andreas even a German coming over from Koln to see them. 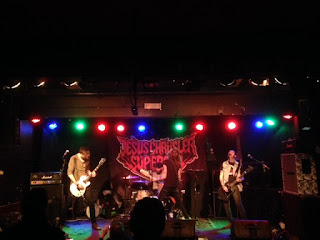 First two support acts warmed us up. Local band Buzz Rockington were unknown to me, but turned out a band to follow. Nice aggressive hooks, Metal with funky and punky influences and a lot of Rock and Roll. Great vocals as well, who switched between styles easily. Hereafter came Jesus Chrustler Supercar, from Stockholm. Their name already being very suitable for Easter weekend they gave us Metal and Roll. The vocalist was wearing a Motorhead T-shirt and this is one of their influences indeed it seemed, While playing good, I did not really enter into the songs. They have some great videoclips (check them out on Youtube) so maybe I was hoping for more. The reality was that this seemed a good festival band playing nice music on the background while you have a beer and bite break. 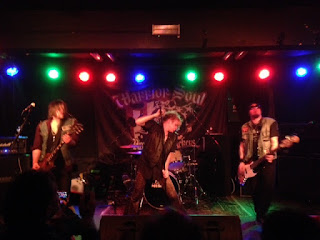 Then we waited for Warrior Soul to rock Musicon. When the bass player came on with four beers, not for the band, but hiding them on a stool next to his amp, we knew some alcohol fueled R&R would follow. Well Warrior Soul came with a storm and rocked through a set of classic songs, which to my surprise I recognized all. Vocalist Kory Clarke is the only original member and he was as active and energetic as I remembered from 25 years ago. His voice however also seemed to have been left in the nineties as we now got a whole different graspy singing. Somehow this did not impact the songs at all. During the more shouting parts his voice kept up well and the ballad the Loseres got a charm with his voice now really doing justice to the lyrics. This turned out to be one pivotal moment in 2016 live shows: hearing Kory Clarke roaring "Here's to the Loseres, the substance abusers, to the rejects, all the imperfects, cause I think we're beautiful." Goose bumps and raising my glass when the lyrics so demanded. For those who could not make it some of their hits played were: Rotten Soul, Punk ad Belligerent, The Party, the Wasteland and closer DownTown. Kory Clarke with a new voice and, a great band are to em enough for a succesful evening. See them on Tour!