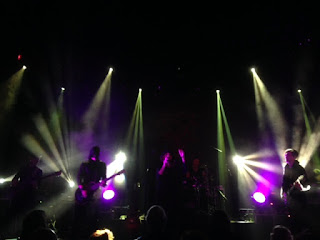 Both Kingcrow and Votum I saw twice before. Once at Progpower and once supporting  a bigger Progmetal band. As I like them equally and have most of their work, no excuse really not to go to de Boerderij. I was expecting two similar shows, as in my memory they both play progmetal more towards the melodic lighter side with Votum at times turning to the heavier interruptions. Later on I would find out that they do not have that much in common any longer really. First we were warmed up by Mind:Soul. a Dutch band who gave us a short but animated set. I don't recall seeing them before, while they played pretty often in the area. Last time was some weeks ago with Resolve whose guitarist now appeared as back-up vocalist in the audience. I think it is nice that apart from the older growing audience also young bands support each other. Maybe not mindblowing, but definitely a nice opening slot and I shall try to see them with a full show next time they hang around Musicon or Saturnus. 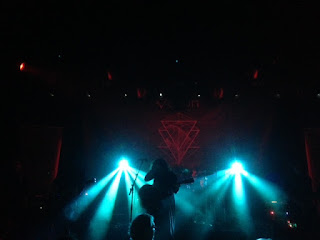 From the double headliners Votum came on first. A dark stage with red lasers welcomed us slightly long, until the band appeared all dressed in black with some of them covering their heads in black hoodies light. From that moment on it mainly stayed dark and black. The lightshow was interesting but almost full time main lights were off and we watched a black hole. Musically I also was put on the wrong foot. They seemed to have turned into new directions really, maybe due to the arrival of a new vocalist. The melodic songs with many softer parts have been substited by a darker, heavier and at times gothlike presentation. Still there is use of heavy light variations, but the overtone is dark and somber. This whole approach did take me by surprise, but at the same time  got me interested in the new album :Ktonik (I got a copy of the unpronounceable CD at the evening). During the five quarters they played I hardly recognized any songs (not sure what old material was actually played) Still the show managed to hold my attention. Dark as it was, and probably pretty preprogrammed it did not come over as extremely spontaneous. Yet I did like the new direction and with the heavy stepping of their Christ like vocalist my head kept nodding in approval. I do need some sessions to fully get the new album which I am looking forward to do soon. 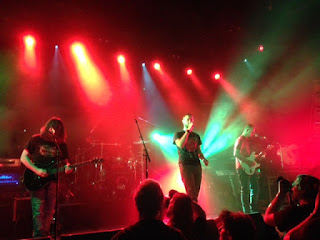 After a short break among a small audience, but with many Progpower regulars second headliners Kingcrow came on. The difference which I expected to be small could not be bigger really. Kingcrow did not seem to be bothered by well thought through stage acts and just went on and played. Following Andre's tip they covered the Votum drums with a Kingcrow t-shirt. The lightshow was full colour and the stage clothes not much different from their audience. But the music was great mainly (or all?) coming from their last two albums In Crescendo and Eidos. I do not recognize all song titles nor lyrics, but at least I knew all the songs. The presentation was sympathetic and they genuinly seemed to be enjoying themselves. Afer touring with both Redemption and Fates Warning I sometimes saw some Ray Alder in the moving and jumping of the vocalist. Eidos did not make it to my top 15 last year, but as with most good bands their songs came more alive to me after seeing them performed live. Their also five quarter set was closed with the epic In Crescendo, where we passed through their full range of ballad, heavy instrumentals and a catchy chorus. Kingcrow again turned out to be a very good band and I wonder what they can do to make it to the next level. Such good songs deserve a wider audience, but competition is killing nowadays. For those still having a chance to see this tour, go and you will leave as pleased as all present last night did.
Posted by erikprogtricolor at 13:06