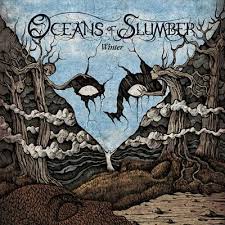 Oceans of Slumber are going to be huge, festival headlining big. And they shall do this while bridging dark, progressive, extreme, female fronted, and classic metal fans. I saw this coming after hearing their debut Aetherial, which I voted number one in my list of 2013 albums. The strange thing is that on their debut they had in Ronnie Allen a vocalist who mainly screamed, which is not my favorite kind of vocals. After he left Cammie Gilbert came in and also Female vocals can hardly be considered amongst my preferred styles (well I like Madder Mortem, Aghora, Atrox, Magenta and some) Yet with vocals not being to my specific taste I love both their albums due to the stunning songs they contain. This band has such a beautiful mix of styles that I just cannot see them not growing to the level of say Opeth or Anathema. Headlining niche festivals and if they are lucky one day become a household name. At least these Female Voices or FemMe festivals should be an easy target as I can not see any female fronted band currently come close to the quality they deliver.

Upon the entrance of Cammie it was decided to first release an EP with covers. I just mention the bands they covered here, as it gives a pretty accurate picture of the level of band we are talking and the ranges they explore. Candlemass (Doom), Led Zeppelin(Classic), Emperor(Black) and Pink Floyd (Prog). This next to a new song Turpentine and an acoustic version of Memoriam from their debut. When I tried to purchasse this digi version through BigCartel I learned they did not supply this EP to Holland (while they did to Belgium?). And now there is a new album, which is simply astonishing (unlike...). Opener Winter builds up to a nice battle between the voice of Cammie and a heavy grunt. The tone is set and the album keeps surprising us several times  Four short instrumental bridging songs, next to eight originals and one cover, a heavy version of Nights in White Satin. Highlights possibly Devout, Apologue and Sunlight. Well actually all songs heavy or calm have something on offer.

Next news I found is that they are coming to Europe supporting My Dying Bride in April. I am sure that they will go down well with that audience and now have to choose which show I am going to see. Never the biggest fan of MDB (well I have one CD of them) I am sure that the 45 minutes support slot alone will be worth the ticket. I do hope they won't ignore their debut in the short set. Then in my view they also should play Progpower during a slot after dinner break, as they shall amaze many there for sure.

For those who cannot make much of a direction about the above words maybe the sticker on the CD can be of help: Atmospheric melodies over darkened dynamics that range from the perversely sinister to the adventurously progressive, creating and undeniable epic wall of sound. Maybe I was not that unclear after all! Don't miss this one!!!