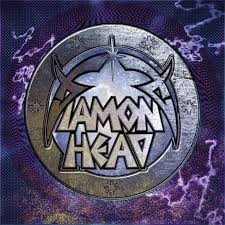 Diamond Head has a long history and I found out that I actually participated in a small part of that. On 3 July 1983 Diamond Head played their first show outside the UK in The Hague. being second band of the day on the mainstage at Parkpop just after a lot called Marillion also first time in Holland. At that time I knew the Borrowed Time album. As this LP saw the band exploring longer less metal songs, they went somewhat against prevailing tastes in Holland at the time and not a huge crowd turned up to see them. While nowadays Diamond Head are known by the majority as that band from Am I Evil, I remember this song was not played that day. Still as this was one of my first liveshows I remember loving it from start to finish. At the festival they also had a stand at the market and I bought the tour program and a patch, which I proudly kept as stand alone patch on my jeans jacket for the coming years. Now a collectors item I do not know where that one ended, but miraculously the tour program survived all my home  moves, even abroad,  since 1983. Interesting to see that in the program amongst their favorites of the last album Am I Evil is not mentioned. That same year they would release Canterbury and controversary would only increase. Poppy as it might be to some, I still loved it and until today holds some of my DH favorites in To the Devil his Due and Knight of the Swords. I also got their debut LP Lightning to the Nations, which is their NWOBHM Classic and holds the songs, building up their set until today and being famous by cover versions of a band called Metallica.

So now there is a new self titled album, the first release since 2007's What's Inside Your Head?. I do own that last one and like it. After a few spins I can already say however, that to me the new album is their best in over thirty years (as I do not own all albums). The riff of opener Bones, brings us back to typical eighties Diamond Head. I believe I hear traces of In The Heat of the Night on speed here. Through the album their are more clear references to their past as Our Time is Now ends with the opening riff of Am I Evil (bridging live?) and closer Silence reminded me of Ishmael with the arabic riff. Brian Tatler is for years the man still waving the Diamond Head flag proudly and he does a great job maintaining their signature sound. New vocalist Rasmus Bom Andersen sounds good and should be able to perform the classics as well.  Going through the songs I believe on lenght and heaviness they are between their rocking debut and their more elaborated Borrowed Time. I have not yet discovered any favorites that stand out. In general I can only recommend this CD to all those in doubt if NWOBHM bands still can make relevant albums. I believe I never saw them again after Parkpop, so 33 years onward it is about time for the Diamond to come to Holland or me visiting the UK.
Posted by erikprogtricolor at 21:43