Redemption - The Art of Loss 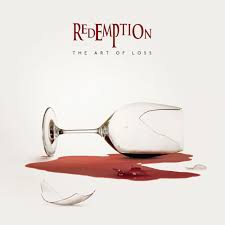 Redemption releasing a new album is something I would look forward to more than just a little. For those unaware of the band, Redemption are the ones most frequently releasing top quality progmetal albums in the 21st century. Apart from their music I also have an emotional band with this band due to some parallel history. This does not refer to seeing them playing live the two times they played Europe (Headway touring the Origin of Ruins and Progpower supporting This Mortal Coil). It is now 2016 and we are almost 7 years from the health scare that bandleader Nick van Dijk passed. When I read his story "How I spent my summer holidays" I just came out of hospital after months living between hope and fear, driven by a major medical cock-up resulting at least in me being still here. The first CD I played while coming home  was Snowfall on Judgement Day, which Hans brought to the hospital when I came to my senses after some hallucinating, nightmaring just plain scary days. On "Keep Breathing" Nick wrote about his hurt due to a suffering child, something I know all too well from personal experience.  Then I read about his multiple myeloma and I just lost it. So when Nick wrote about his fights on next album "This Mortal Coil" I could more than a little relate to some of the words. But now there is a new album so how does it sound?

To start with the Redemption story continues to be scary. This record has been made without guitarist Bernie Versailles who is recovering from medical issues. Wishing him all the best I do hope for a full recovery and him returning making music for us. Bernie brings the Agent Steel part into Redemption, which mean the heavy and fast work. Substitutes for him came in multiple form and we are treated on some great solo's and riffing by Marty Friedman, Chris Poland, Chris Broderick (all ex Megadeth) and Simone Mularoni (remembering me I should listen to that last DGM album once again) Finally Jon Bush joins on vocals in the Who cover dedicated to Bernie. Still I did not write about the album itself. Well it sounds great on songs, sounds and performance. If there would be  a critical note, it would be for me the fact that this is album number six. The element of surprise is gone by now. We get some heavy songs, some calm intro's, many great guitar solo's, Ray Alder in topform and an epic of over 20 minutes, Regarding the epic, they have created this problem themselves. In my view noone is ever going to write a better epical progmetal powerballad then Redemption did with Sapphire. At Day's End is a nice attempt, but not the highlight of the album for me. Those would be Thirty Silver and The Center of the Fire.

Overall we gained another album, that confirms Redemption being one of the most stable deliverers of Class Prog Metal albums. The surprise is gone for me, but who needs surprises when the standard is this good. How it compares to their other albums only time will tell and if live shows are an option without Bernie I would not know. Finally it is good to see that Redemption did not walk away from metal, so not following the 2016 trend set by some others.