This one I was looking forward for some time: Tesseract who released the very decent Polaris last year and The Contortionist probably my favorite band in the Djent genre whom I never saw playing live before. Exactly two years ago I did see Tesseract with other djent bands and I made many comments on the whole experience. While being so close to Progmetal the audience and atmosphere are just very different. Without going too much into repetition mode, here some words that describe the observations in short. Colors, beards, many beards, student gathering, Apple watch, low beer consumption, quiet audience. Upon arrival another surprise in the long entering line. Having been many times to de Boerderij, including sold out shows, this was new to me. Good point was that even on a Sunday evening this meant a nicely packed Boerderij. 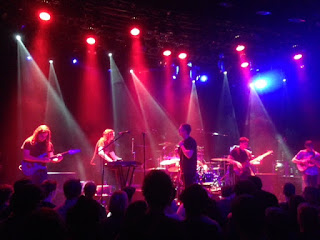 Because of the delay in getting everyone in, The Contortionist started 15 minutes late, but off we went. I discovered them on their second album Intrinsic. That album had mainly screaming vocals and some light interludes. On the last one Language the balance changed the other way around and we have 90% clean vocals. Somewhere I read about them as Ambidjent and this describess the picture nicely. Starting off with Language I and II the show took of on a mellow note. Most striking was the presentation of the vocalist. As noone was ever introduced I do not know his name, but he had a quite unique way of performing. Walking around slowly with his arms held up mostly close to his body and eyes closed he seemed to be on a different planet altogether. The rhytmical breaks he would accompany by a sort of backward headbuts and occassionally he would start clapping and this worked well as he was followed. Surprisingly the audience also held their hands before them while clapping along and my long boney arms stood out like an honest man in Fifa. While I do prefer their last CD, which is a more comforting listen, live the heavier songs were a welcome break in pace and aggression. When we got the aggressive screams the decibels went up and so did the mood. They played some songs from Intrinsic but I could not recognize the titles of non introduced ones. By his performance the vocalist attracted the attention, but the band played impressive. Seemingly not allowed to move around, they really created a perfect background for this different show. I loved the twin guitars who took many licks from the Watchtower school of Ron Jarzombek as inspiration. All in all this was one remarkable show, which fully lived up to my high expectations. One doubt that I have for further development of The Contortionist is their stage show. As support act, during a too short set they can get away with the limited interaction and just perfect performance. If growing to bigger stages and festivals somehow this might create a distance too big for those unfamiliar with the band. 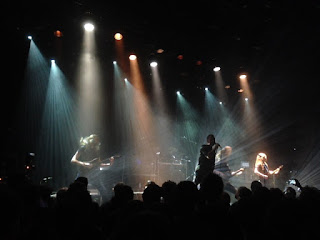 Question after this was if Tesseract, would be able to follow this one up. The answer to that is twofold as the majority of the audience came to see Tesseract and would reply with a clear yes. For me however, they could not. OK the show was bigger, the stage fully used, the lightshow beautiful, some words from the vocalist and they opened with my favorite song from Polaris Phoenix. Still I felt something was missing and after a while I realized what it was. Where the Contortionist had this great variation between dreamy and really heavy parts, Tesseract stayed more in the same vein all the time. This means heavy riffs, a break and clear vocals. I cannot say that the songs were not good, and the performance and show were even excellent. Still I did not manage to stay interested full time, by the lack of variation. Two years ago I wrote that Tesseract could be a welcome headliner at Progpower in order to attract new audiences both ways to Progpower and to Djent. Now I think that this year's headliner Textures shall do a much better job at this as they do use the variaty of heaviness to the max, something I missed yesterday.

All in all another succesful evening at de Boerderij, with The Contortionist exceeding expectations and Tesseract giving the stage show. In appreciation I did buy the Contortionist Tee, but old fashioned as I am I got the Black one.