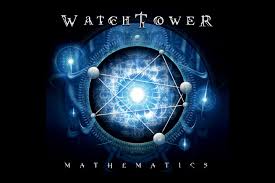 Mathematics might still be coming our way!!! The album the tech metal loving world has been waiting Pi semi decades for seems to be underway and as dates are always an uncertainty in the Watchtower Universe they have now released three new songs. Going completely against my beliefs I did order these songs through iTunes. Struggling to remember the password and to find the songs after purchasing them I am now displaying a large smile as these new songs bring me back to the times of Classic album Control & Resistance. This mainly because vocalist Alan Tecchio is back at the mic.

Watchtower are for me the start of everything tech metal. When the big three of Progmetal already set the tone on a genre that would fit my personal taste to the max, Watchtower added some crazy rhythms, surpising breaks and total wizzardry on all instruments. First time I could see them live was  around 1990 when they played het Paard in my hometown (when they still frequently had good metal bands coming our way) During some apartment moves I lost the Classic Control & Resistance Tee, but the LP still frequently turns when I go back in time and play some old LP's to remember the eightes in style. At least 20 years ago Mathematics was announced as follow up, but not much happened really. Some ten years ago Watchtower came back to Holland and headlined the Headway festival.  With Jason McMaster on vocals this  was again one showcase of energy mixed with amazing play. Their encore a Watchtower hyped version of 2112 is still a highlight of everything I ever saw live on stage. In 2010 they released one song Seize of the Matter when returning to Europe to play Keep it True (the festival that always reunites the best of the eighties and sells out before I can decide on going or not)

And now they are back working on the album. M-Theory Overture is an instrumental with the Ron Jarzombek signature all over it. Together with the pulsing bass of Doug Keyser it does not need long to recognise which band is playing here. The next two songs include the vocals of Alan Tecchio and make me look very much forward to the complete album. Arguments Against Design and Technology Inaction show me why I have missed Watchtower for so long. Hectic metal for the unquiet souls is just what you need on a dull autumn day. For years I  have been asking for Watchtower as headliner for Progpower Europe on their questionnaire. Lately I gave up, but now I am hopefull again and count on them coming back to Europe soon. Mathematics is coming our way!! for now I go and play Demonstrations in Chaos