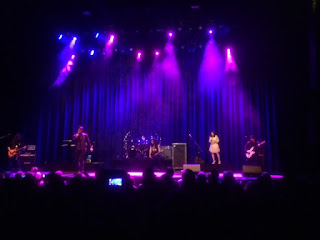 So I had my doubts about Geoff Tate and his new band. Are his vocals still up to performing one of the best (if not the best ever) concept albums? Is the band good enough? Will there be anyone bothered to go and see them? Can we relive 1988? So while still in doubt things were made very easy for me by DPRP. By answering 3 fairly easy questions I got two free tickets and Hans & Mary joined for an evening of Operation:Mindcrime. First we had to be warmed up, which was not an easy thing in the huge new hall of 013. Apart from that the supports did not get anyone in the mood really. Fire & Water were good musicians, but an Irish due going on acoustic guitar and sax through some covers and own work was quality wise good enough, but had nothing to do with the main act. Young local band Wildfire only showed that they had nothing to justify their presence on this stage. Why not bring for example one of the three great bands I saw at Progcity two weeks ago? Luckily Mario from MMM made up a lot by playing the best inbetween music ever heard at a progmetal show. Only songs matching the audience's collective pasts. 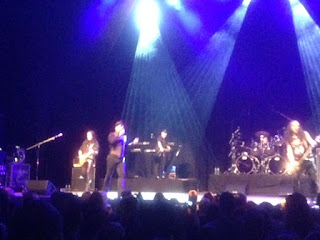 And then came OM. Starting of with I Remember Now, we knew the full album would open the set. Just like us many people took a kind of wait and see attitude. In the past the spoken Hello-oh and You Bastard woudl be warmly shouted along, but now it remained silent. When Geoff Tate came on the first approving smiles appeared as he surprised us with a rather good voice. He was dressed Chicago mob style and the tie, hat and sunglasses did not come off during the whole evening. The band might not be the original Queensryche, but were good enough. Earlier this month I saw another favorite 80's album of mine being partially ruined by a band that was not up to the job (Fish : Misplaced Childhood). This evening the solo's might have been slightly less aggressive at times, but nothing disturbing the flow of the album. So we got a very good first hour guaranteed with so many highlights we love from that album. During Sister Mary the girl from Fire & Water appeared on backing vocals. explaining their presence and giving an added value to the show. When Eyes of a Stranger closed the first part, the evening was already a success to many. Hereafter we got the new album represented by new songs. Sounding Okísh I decided to get the abum and a Tee as and effort for the band. 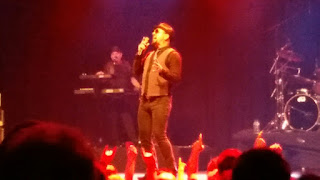 Then we still got some work from the Queensryche past and some surprises appeared. Damaged I did not hear in some time and was very nice. Closing the first official set with traditional closer Take Hold of the Flame did raise the atmosphere even more. After a short break we were treated on 4 more Queensryche songs. Their ballad hit Silent Lucidity opened. Then came in The Thin Line another surprise song. helped by the F&W girl on sax this was a highlight in the evening mainly due to the unexpected factor. Closers were Yet City Women, possibly the worst song from Empire, plus the title song from that same album. After the show there seemed to be a consensus in the hall. Most people entered with doubts and this evening was much better than we hoped for. Geoff Tate appeared to be in great voice, the band was good enough and the setlist was great with next to Queensryche's best album, some surprises and known songs from the past. Maybe the sad fight within he band did result in two great alternatives after all. Interesting enough both versions avoided the dip 1996-2013 resulting in great shows.
Posted by erikprogtricolor at 12:56