Fish saying Farewell to Childhood, means two quickly sold out shows in de Boerderij. While most people seemed to come to hear Misplaced Childhood indeed, Fish started with what seemed 5 random songs from his solo back catalogue. While all songs would not be me favorites from their respective albums it showed the huge base Fish can dive in to bring us music. Highlights on this section were "The Perception of Johnny Punter" which remains linked to actualities and the for me under the radar song "Long Cold Day". Especially the aggressivenes in the line "it'll be a long cold day in Hell before I take you back" was impressive. Coming to Fish, his voice seemed better than it had been for a long time. Very convincing performance and his inbetween songs bantering about women, old age, football and a horrible South African rugby referee were amusing. Family Business has been a small hit in Holland so got most response. 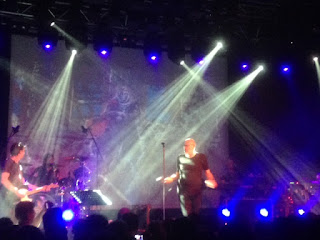 After five songs the show turned to what brought most people here: a full visit to Misplaced Childhood. For me this was also the point where the show took a slightly dramatic turn. Misplaced Childhood is one of the most played albums by me, so I do recognize every line and every note. And then there was the band. While doing fine during the Fish songs they just did not seem up to the job of copying perfectly the original. As such this is not a problem, since Fish's voice changed and he walks different through the album as well. The problem was that the keys on Pseudo Silk Kimono did hurt your ears and the whole album the guitar seemed to be playing with a brake on, never giving us these eruptions that Rothery gave and brought the album alive. So while I was looking forward to seeing one of my all time favorite albums being performed live, it turned out the low of the show. 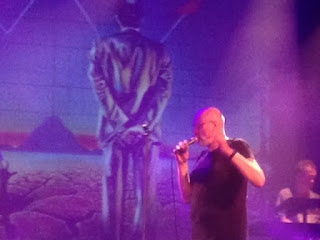 Never give up before the encores though and Fish did gain most points back. However, this time the audience did not response as they should. With many people there who want to relive their past the atmosphere was dead all out. So if Fish plays Market Square Heroes one of Marillion's hardest rocking songs ever, there should be some kind of reaction. For those who believe they should stand in front of the stage some responsibilities come with that. One of them is that when Fish sings "Are you following me?"you go apeshit crazy and do not do your best impression of a bag of potatoes. During MC, the half muted Childhood chants were already embarrassing for de Boerderij, but now they took it to the next level. Actually the spark never went from stage to audience and it was the most boring audience I ever saw in de Boerderij. Mind you I've seen shows there with only 50 people around, but humor and participation were always there in one form or another. But the band played free again (seemingly relieved they passed through another MC performance) and the Market Square Hero rocked. A final goodbye was dedicated to missing Euro Chamionships for Scotland and Holland which leaves drinking as an alternative. The Company is the singalong song and a perfect closer.

So the evening overall was nice, but this won't be going down as one the Classic Fish shows I attended. Strangely his voice and form were very good, but I guess you need a better band and audience to have a party. I will keep on supporting Fish though until his farewell tour in 2017 ordering a table for one for the word drunk poet.