The story of Dead Lord is very similar to the one of Absolva to me. I did not now them, saw them earlier this year and bought their two CD's, after which they came back to Den Haag to see them playing again while knowing their songs. So yesterday for me was all about Dead Lord, with high hopes for 77 and som doubts on Danko Jones. Het Paard is the renewed venue in Den Haag with the worst programmer in the region. Reason why I hardly ever go there. Without knowing Danko Jones really, I was surprised by the subscription Alternative on the posters and the audience also looked alternative to match. Rarely seen so few black T-shrts at a Hard rock concert, nor often so many women but later all would be explained. 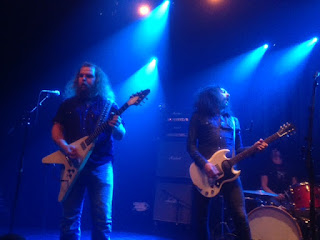 Dead Lord opened at 20:00 hrs. and a half full floor saw them going through their set covering both albums. I missed both great opening songs "Farewell" and "Hank", but was not in the least disappointed with them. Dead Lord bring back the guitar battles in great style. All songs are full of twin and swapping solo's and the feel is just great. From the posed guitar lifting during "Because of Spite" to the soking amp in "When History Repeats Itself" the show was entertaining and lively. Being the opening band gave them less space than last time in Leiden, but what good 45 minutes we had. After closer "Hammer to the Heart"I silently hoped for "Farewell" as an encore but it was not to be. Definitely one of the better new life bands who tour their socks off all year around. As they are touring that much I count on may returns to the area. 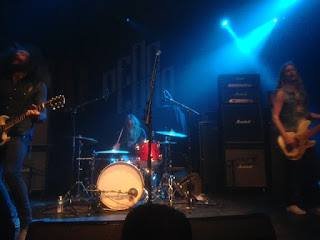 After a short break 77 from Barcelona came on. They are being critizised for being too much an AC/DC clone. After seeing them life I would say who gives a shit 'bout that. What an energetic show, great songs and a band having fun and knowing how to pass this on to the audience. Two brothers at the front on guitars and vocals a jumpy bass player and a Spanish Animal on drums make them a joy to see. One round through the hall for the guitarist and after a short break ? three more songs to keep the spirits high. It seems that Barcelona is becoming fast one of the new hotspots in Metal. 77 playing Classic Hard Rock and Obsidian Kingdom plus Exxasens highlights of Progpower and last year extreme releases from Vortice and Foscor make the city able to pull of a very interesting festival of homegrown bands only. Before leaving during Danko Jones I tried to pick up their last CD as support, but unfortunately they had left the building. 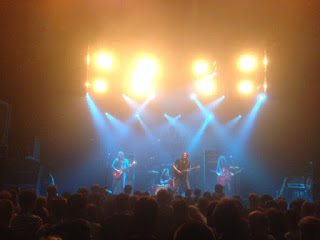 And then came Danko Jones. So yes there was energy on stage and in the audience, There were fast rocking songs and easy to move on rhythms (hence the many dancing girls). But it just passed me by in a boring blaze. I guess just not my thing as the majority of the audience seemed to love them. Turning 50 next month I also might be that bit old to shout along 'Do you kiss on a first date?". Mostly this reminded me on The Offspring with their adolescent Punk/Pop Rock & Roll. They can built a party, but just not mine.
Next Monday Dead Lord and 77 shall play Holland's best Metal Bar Little Devil in Tilburg. I hope many people show up, as these two bands on that small stage should be brilliant.
Posted by erikprogtricolor at 14:49