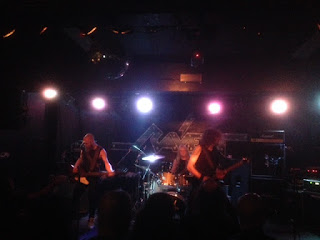 Raven in Musicon!!! One of the bigger names I saw playing under the THHMA flag. Friday night and a good support band, so Musicon was busy and the atmosphere was great. Starting the evening was Distillator from Enschede. At Schollenpop they were already one of the nice surprises and now in a small place their thrash metal came over even better.  As a retuning band they got quite some reaction and even after calls for them to stay Ruuusssstaahg they definitely did not slow down. Great band and in Holland you won't meet many better thrash metal bands leaning towards the Slayer corner. Got their CD Revolutionary Cells at the end of the evening and can recommend same. 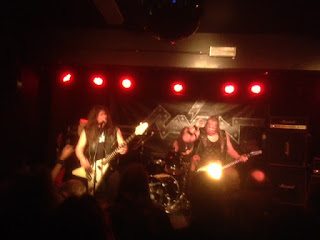 Being warmed up well did help, but when Raven hit the stage matters got even better. So they might not be the slim athletic rock trio of the early eighties, they definitely did not loose much energy over the years. Opening with Destroy All Monsters of their last album Extermination stated nicely that their last work also is still very relevant. Hereafter we went through their history passing many albums. As with most NWOBHM bands we came to see the eighties back alive and so we got  Rock Until You Drop, Live at the Inferno, All for One and Mind over Metal. From start to finish Raven came saw and conquered (not Hung Drawn & Quartered). They come over as a band who love to play and give it all always. So when after Break the Chains the lights went on we were as thirsty and tired as the band. 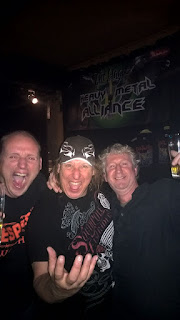 After the show Raven walked through Musicon showing to be as sympathetic as they looked on stage. With Magchiel joining and being more into signatures and pictures than me (I usually am ok with a thank you for the show), I suddenly had a signed Rock Until You Drop DVD and could see the next morning on my phone that the evening had been nice. Their tour now moves back to the UK. For those having them pass nearby go check this out, you shall drop.
Posted by erikprogtricolor at 13:06