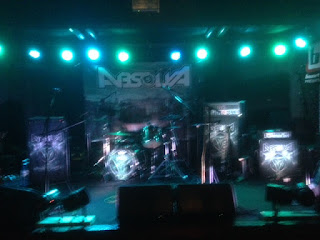 "We are Absolva and it's Never a Good Day to Die". Unfortunately too many people also thought it was not a good day to go to Musicon. Sharing some of the excuses: Sunday night or the day after Halloween (yes this seems to be an excuse in Europe as well nowadays). I believe the main reason can be found in the huge amount of shows we can see nowadays. The Friday before I sent a mailing to friends asking who wanted to join me on any of the 21! potential shows during the coming 5 weeks.  The huge offer is great for fans, but results in choices and some empty places on less favorite evenings. But hey I went to see Absolva one of the hardest working bands around. As their roady told me, even on quiet shows they always pick up some new fans and slowly they shall grow. For me this is fact as seven months ago I saw them for the first time live also in Musicon and here I was back to see them promote their Bond movie titled new album. 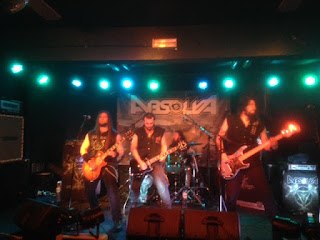 As there was no support band we got an extended show of 1.5 hours and a nice overview of their three studio albums. Absolva play heavy metal and do this very well. I got the new album only on the evening, but especially "All Alone"and "No Tomorrow" sounded very promising at first hearing. From their previous two albums the highlights came for me in the form of "From Beyond the Light"from their debut, with some crazy fast twin guitar soloing over and under guitar necks. Highlight of the Anthems to the Dead album came for me in the form of epic "Silent Sacrifice". Their songs are just plain heavy metal and the covers from Iced Earth and Maiden blended well with their own songs. If Absolva were disappointed with the size of the crowd, they did not show this and played an very entertaining evening of metal for us. Also during the set those present from cautiously waiting changed into a full shouting out loud ending on film. Next time they are in the area I shall be back again as well. Actually their first return is already booked when they play Gebr. de Nobel in Leiden next March backing up Blaze Bailey during his tour. Great band, great show, great CD. 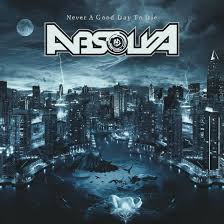