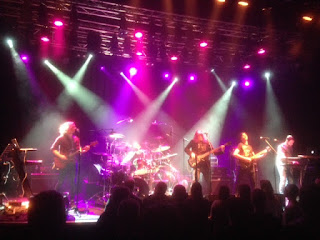 John Mitchell is one of the house artists of de Boerderij. I saw him in the past several times with Arena, Frost*, John&John, PBII and missed him with Kino (don't know if he also passed with It Bites or The Urbane ever before). So when he released this year his solo album under the title Lonely Robot, it was no big surprise that when he decided on a venue to play outside the UK it became de Boerderij. To make the evening even more interesting he brought along a band he produced in English progmetallers Hekz. 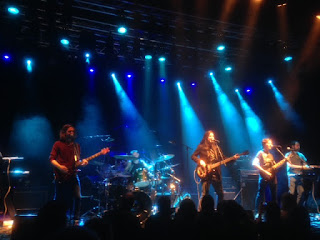 Hekz had the honours to open the evening. Last year they played a progmetal festival in Holland which I missed, so for me a Dutch debut. I only knew them from Progstreaming where I heard their last album once on the background through a mini laptop. If tonight proved one thing, it did show that listening half hearted to a band on a laptop is definitely not the best way to judge a band. As from the first notes I realized that we had something special on stage. Hekz plays progmetal, while not moving to far from heavy metal itself. The vocals reminded me sometimes of Bruce Dickinson light and at other moments of Geddy Lee. A definite highlight were also the swapping guitar solo's throug all of the songs. As I was unknown to their songs all came fresh over me, but The Black Hand is one of those gems that immediately stuck. They got plenty of time (75minutes even?) and the night could already be a considered a success when they left the stage. The rather chauvinistic British Prog magazine already slightly hyped this band through the past years. These articles reminded me on the way Haken was pushed. After seeing this show, thoughts went back to Haken opening Progpower some 5 years back. Technically at similar levels I considered Hekz a renewed Haken, but without the cabaret bits. Great band to follow and a potential Progpower-after-dinner-break-band for sure. 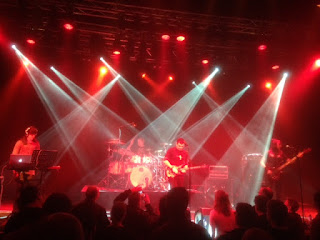 Afer the break Lonely Robot came on. The first remarkable fact about the band was that on keys and bass we did not get the usual bolding or bulking blokes, but two girls who looked like they could be John's daughters. They were not and turned out to be good musicians. The bass player also took care of some female vocals. While on the CD famous females in Progrock helped out, these were not missed. Tonight's vocals were pretty similar and personally I do not care a lot about female voices in Prog. Completing the band was Craig Blundelll from Steven Wilson fame and a powerhouse indeed. For those who do not know John Mitchell, he is way up there among the guitarists with emotion written all over. This evening wasone of the few shows Lonely Robot shall play and they went to start through the whole Please Come Home album. Opener Airlock got us going and we saw that it was good. Several songs from this album have their own mood and with some explanations on the intentions behind the lyrics we got a great show. Bands owning one album and following that through a show do lack the element of surprise, but quality made up for that. So our hopes were on the encores for some surprises. That is where things went slightly disappointing. First song was Here Comes the Flood and frequent Boerderij visitors (probably around 75% present) saw John sing this song more than once before. Than came a drum solo and another song I did not know (Gabriel again?). So where were the Kino songs? 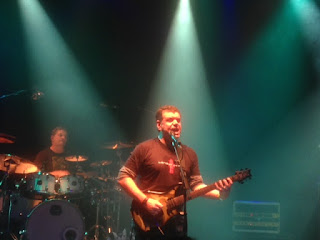 So John Mitchell gave an enjoyable show due to his ever great guitar work and sympathetic presentation. Only minor problem to me was that the only song I don't like from his album (Oubliette) stuck in my head until now with it's nagging chorus. Winersof the evening however to me were openers Hekz. The buzz is right and they have all the basics for becoming big. Keep an eye on them and hope to see John Mitchell next time with It Bites or a reformed Frost* in de Boerderij.
Posted by erikprogtricolor at 16:27