Submarine Silence - There's Something Very Strange in her Little Room 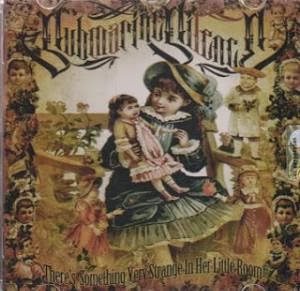 While I am curiously waiting for the arrival of new CD's of Dream Theater and Fates Warning to decide which of the great three in Progmetal releases the best new album this year (as if I shall give DT a fair chance) I decided to quickly put some attention on this little unnoticed grower in the more symphonic, excentric prog rock world. Submarine Silence releasesd an album before, but are new to me. In this setup that is, since I do own most releases of Moongarden, members of which are the core of this band as well. Cristiano Roversi on Keyboards and guitars plus David Cremoni on guitars are the basis of the band. While Moongarden are slightly heavier, we get here Italian Prog which on the non instrumental songs is dominated by Peter Hamill like vocals. Just for that reason any fan of VDGG or Discipline should already give this CD a try.

There is a story being told here as well, but with one of those booklets which aim at making the letter type as hard to read as possible I did so far not bother to read along. Still I must state that on every new listen this album still manages to get more interesting to me. Many short instrumentals are mixed up with some haunting songs with vocals (Strange Awakening) and overall there is some threatening atmosphere over the music that kind of gets me interested in the story anyway.

Keeping it as short as promised, nice album both for headphone listenings or on the background during a romantic autumn evening with the wind howling around the house. I do hope though that Cristiano Roversi who also released a solo album recently shall find some time to write new material for Moongarden as well. Great when creative artists aim at releasing many parallel projects at the same time. Surprisingly good album and wondering when it stops growing on me.
Posted by erikprogtricolor at 22:09