Wednesday night, one month before returning for Progpower festival, a new CD being too recent with two days after official release to know, Moon Safari the day before for soft Prog fans, Mike Portnoy with  his new band The Winery Dogs two days later, both at the same Boerderij. To go short the odds were not too good, so I can only conclude to be more than a bit pleased that at least the front of the Boerderij was nicely packed and over 100 people nowadays on a Wednesday night is not very bad any longer. Stop nagging about small audiences the best news was that Haken were better than ever before and defintely convinced the ones who were there that they are one of the bright hopes for both Prog rock and metal audiences. 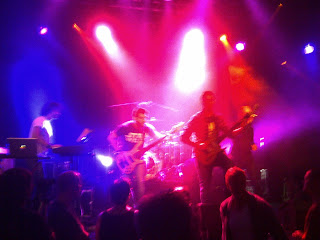 First we got warmed up by the to me unknown Italo-prog-metallers from Soul Secret. 4 songs in 45 minutes with some great instrumental parts and the special one on vocals. Not that his voice was in the prog-metal uberleague, but he looked more than a little bit like Jose Mourinho (sorry the picture is out of focus during an instrumental break). Nice opener and maybe not shockingly renewing yet another good band from Italy (I missed Kingcrow live last Saterday, but also recall great Italian shows from Moongarden, Sadist and Memento Waltz).

Haken headlining was a new experience to me. After festival appearances at Progpower and Night of the Prog, they passed de Boerderij last year together with Headspace. This time we got treated on a full show of 1 hour 45 minutes and since both band and audience seemed to like it no doubt they shall return. As I bought their new album The Mountain at the show I only read some raving reviews on the album, but was not familiar with the new songs. Not to worry since Haken is based upon standing and staring in awe. Not many bands do switch so easily from style, while making it all sound extremely easy. For those who did not like them much before I can tell that also the new songs included anything from burlesque circus music to pretty heavy metal. For me the going all over the place is a bonus, since part of the show is admiring their control. Helped by yet another great sound at de Boerderij (great stage sound by Ron Dingen) the time flew by and one epic followed another. From the new songs most striking was Cockroach King, which had some reference to the Spock's Beard Thoughts songs as well as the more metallic parts. My favorites of the old songs were Shapeshifter and Drowning in the Flood, not coincidentally two songs which go all the way up to grunting. Mentioning the grunts I do know that in the past Ross Jennings on vocals has been mentioned as a possible limitation to the bands development. I never saw this during their live shows, but yesterday he was even better than I saw him before. His range from carrying a piano ballad to shouting and grunting is impressive all around. 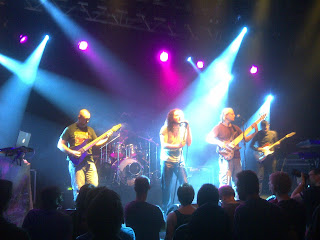 But Haken is about the band and all are masters in their area, showing off in a sympathetic way that they are just a bit above average. I shall now put on a headphone get the booklet out and read along while playing The Mountain for the first time. No doubt many spins shall follow after which I know all the songs again when they hit Baarlo. If they more than impress a little again I might even look for Danfest tickets, but with the amount of shows coming up the next months that remains stargazing for the moment.