The Fish is back! The Fish himself said so and right he was. Promoting his first new album in 6 years (A Feast of Consequences) a European tour started and after three UK shows he arrived in good shape in Amsterdam. A new album meant many new songs. I am one of the few thousand special edition orderers who missed out on the target date due to a printing company letting Fish and Mark Wilkinson terribly down. This meant undergoing the new songs for the first time life and I can say I am now curiously waiting for the album. Especially the long song on WWI was impressive. As always Fish sings about matters that touch him. So we got WWI, Global warming, Syria, X-Factor celebrities, vinyl and wine, Fish on stage is one of the greatest personalities and it remains amazing how he manages to dominate an audience. 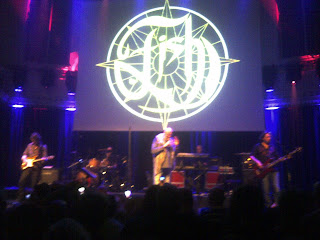 So there were many new songs, but also a lot of Marillion Classics. 30 years after launching the album I was more than a bit pleased when Fish after an all new opening sang one of the best opening lines ever: "So here I am once more, in the playground of the broken hearts". Script remains one of my all time favorite songs (which I noticed I can still shout along from start to finish) Further we got He knows, Assasing, Freaks, White Feather and the jumping shouting part of Fugazi. And to complete the two hour show we got a nice overview of his solo albums. Interesting to see how some of the songs that on album might not be my favorites, came really alive and were highlights of the evening ("What color is God", "Suits"). 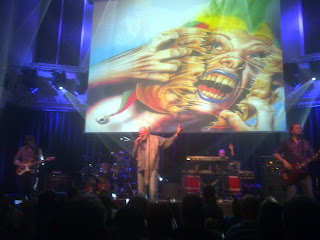 For an entertaining evening of great music Fish proved to be still the man. How was his voice? is not an unusual question. Well somewhat light at the beginning, warming up through the show and very good on the oldies. Anyone in doubt to see Fish on tour should stop doubting and support the man that deserves it based upon his great legacy for music lovers. The Fish is back indeed.
Posted by erikprogtricolor at 21:32