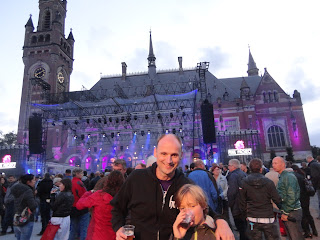 The Hague is the city of Peace and Justice and happens to be my hometown. The Peace Palace is commemorating it's 100th anniversary and the week started with a live show of Pink Project. Since next week it is world peace day, as well as Tiago's birthday and it is about time we confront him with some good music Tiago went along and we enjoyed a beautiful show which easily exceeded my expectations. Pink Project exist almost 20 years and the way they went through Dark Side of the Moon before the break and essentials of The Wall thereafter was impressive. Being Tiago's debut at a paid show it was nice to see that the show was also extremely well prepared, with many interestimng clips playing along on the two big screens next to the stage.
Playing was flawless, singing was good (Great Gig in the Sky, was a highlight on vocals) and nothing lacking a show matching this occassion. I won't repeat comments/frustrations why a cover band attracts 10-20 times more people than the great Galahad (or I just did), but with the lack of original Pink Floyd existing and Roger Waters playing The Wall last week for the third or fourth time in two years in Holland, this is the best to see this timeless music being played live.
Personal highlight: clapping and singing along with Tiago during "We don't need no education". 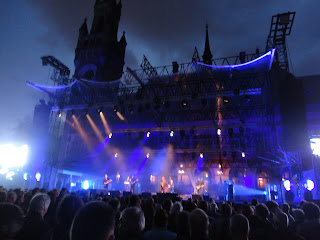