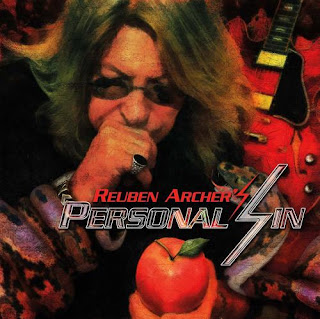 Well here's another surprise for you. Those who know me, or this blog when I still wrote in Dutch know that one of my all time favorite bands is Stampede. In the early eighties they released two classics with thier debut Live (!) album Official Bootleg Live at Reading and Mildenhall plus my all time top five favorite album Hurricane Town. They reformed some years ago and released the very decent A Sudden Impulse. Stampede was formed by Reuben Archer and his stepson Laurence Archer in the early eighties. Doing the simple maths we can conclude that Reuben now reached an age where most people think about retirement. Well not him and let us be very pleased with that decision. Apart from setting an inspiring example, this album just gives us great eighties Bluesy hardrock that unfortunately is not mached by many younger hard rock bands nowadays.

The list of guests is enormous and with names like Dave Menikketi, Luke Morley, Paul Quin, Neil Murray anyone loving eighties hardrock knows that lack of quality is not an issue.The songs themselves are also in a style I can not make many complaints about. We get Bluesy hardrock uptempo and more ballad like. We get lyrics about personal sufferings and Rock and Roll, but mostly we get Reuben Archer showing that he is still one of the best voices in melodic hard rock. Rob Wolverson needs to be mentioned as well, since he is the other driving man behind this album.

Anyone with the slightest interest in eighties hard rock, or who like me recognizes that Hurricane Town is one of the best albums ever released ( I know we are with a rather small crowd) absolutely needs to give this album an ear. Doubt it you shall not be happily singing along  with the Ace Cafe, Bulletproof, Personal Sin or the single Play my Rock 'n' Roll. Without aiming at disrespecting the proofen still top vocals of Reuben Archer I cannot let that lyric pass. "Mama Don't allow no Rock 'n' Roll Playin' here". Given Reuben's right to retire his mother should be pushing 90. Good to see that no matter our age, we still get upset by what our parents think and want.

While Reuben Archer thanks his friends by raising a glass of good Rioja, I shall raise many Bock Beers to him over the autumn, since surely this album will appear in my CD player a lot. What a good surprise indeed.