Under the monniker Serious Music event Galahad hit Holland again and serious it was. Upon late arrival we were already told that no pinning option was mentioned by the ticket exchange and we should have read the information. The venue turned out to be a cinema setup, which basically kills all attempts for good atmosphere. To top things drinks were not allowed inside the venue, which me being by car was less annoying than if I would have opted for public transport. Finally on the serious front we had opening band Sylvium releasing their CD. If you have six man on stage and only the drummer and bass player seem somewhat at ease being there it becomes nerve-wrecking to watch this. Probably if hearing their CD only I would rate them higher, now easily scoring very high on my personal list of most boring shows ever. 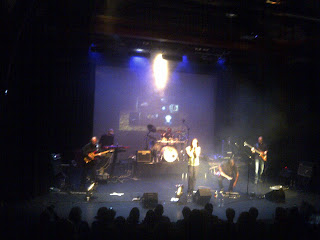 After an half-hour break (where everybody wanted to order a drink at the one bar) The Aurora Project came on and things could only get better, as they did. I saw them before at Progpower and once supporting an international band and considered them OK. This time however, I thought them very good. Obviously their last CD Selling the Aggression is their best album yet and playing it in full made me buy it after the show. It was nice to see how apart from the great songs, interesting anti-war themes and good performance overall also the show got some attention. We got on video several interesting images accompanying the music and the band seemed to enjoy themselves as well. I did not realize that this band would now be among the best bands Holland has to offer, great surprise. 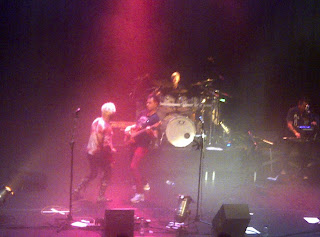 Following the second half-hour break Galahad was on. It is already a joy to see their stage outfits before starting and the shouting back to the crowd from Mark and Roy showed Galahad are performers and they come to entertain us. Never a boring moment they run through their last albums showing us how well the blend of electronic music, heavy guitars plus prog epics com alive on stage. Lyrically they often go for optimism and good doing coming from yourself rather than any religion or god. The last shouted line from opener Salvation set the spirit on that sense: "Believe in your own bloody beating heart!" Last year they just released Battle Scars when they played live and put the focus on that album. Meanwhile they also released Beyond the Realms of Euphoria and the show centered around this one. Only oldy was Sleepers which we got in an epic performance. On bass we now have Mark Spence and seems slightly mental onstage, which adds so much to the whole experience. After one and a half hour we got one encore and one year down the road I can state that "Seize the Day" is the ultimate party-dance-prog-jumping-up-and-down-yet-very-uplifting song. Finally we got to our feet and people did jump, clap and grin along. What a blast as a finish and I do fully agree while shouting along "Seize the day, relish every moment. Make it something to remember". 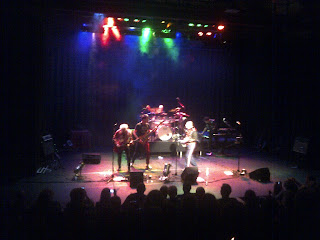 So a word of thanks to the organization is in place, you could feel the love for the music that drives them to give us this evening. For me the venue is not very suited for rock shows (at a certain moment I wished being in de Baroeg,, which being a sleaze dark metal, beer and sweat place is so much the opposite), but anyone who gives us one of the most entertaining live bands should get a lot of credits.