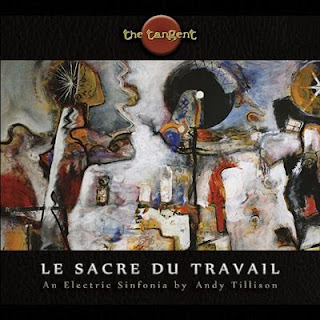 Andy Tillison, the ridiculousy talented yet absurdly unknown musician, nailed it completely this time. With Paralel or 90 Degrees and the Tangent he already gave us many great albums, but now he released his masterpice: Le Sacre du Travail or The Rite of Work. A hour piece of music broken down in five movements tells us the story of one day in the life of you going to work, passing the day and coming home to watch some television, waiting for the next exciting day which shall be exactly the same. Through my working life I have been in various stages perfectly described here, from extremely boring temporarily jobs, to nowadays a daily commute of over 30 miles as decsribed (although I go environmental friendly by bicycle and train) First highlight on this story are the great lyrics, wondering why the majority of people travel each day to spend 8 hours doing something they do not like. This results in great lines like: "To the car parks by the buildings, where we hate away our day"; "She punches her name to the company mainframe and logs into her pact with the Devil again"; "A modern day warrior, today's Tom Sawyer is a clerk."; "Always thought that there was more. More than this...evening cups of tea and shows you just can't miss.".
Yes Andy does ask the right questions and probably we all have been at one stage in life through these questions already. Interestingly his audience is basically male hanging around a mid-life crisis, so maybe this CD makes some people think and act. Yet, it is only given to few to pack your things and move to France.

But this is a CD and not a book (that was 3 albums ago with "Not as good as the book") I might say something on the music as well. There is no reason for complaining here either. The musicians helping out are all of great reputation and that shows during the Symphony. Theo Travis Flutes and saxes along nicely again, bringing some classical music into the picture. Jakko M. Jakszyk is solid on guitar and bored drummer Gavin Harrison together with bassplayer Jonas Reingold are an above average rhythm section to say the least. Finally we have David Longdon of Big Big Train fame, helping out on vocals and completing this real all-star line-up. The music basically goes all over the place, with possibly all influences you can imagine coming back somewhere. Since all keeps the Andy Tillison signature, at the same time the album sounds comfortably known as well. On the extreme influences, probably the most sympathetic song on the album is the bonus 1:14 minute punk rocker Hat.

This album also knew a crowdfunding campaign. Usually I am sympathetic to those actions, but for this one I missed out on the propaganda completely. So in compensation I can only recommend everyone to get this CD. In the last issue of Prog Magazine Andy states that Playing Live with a Progressive Rock band is a magnificient way to lose money, which puts some doubts on ever seeing this album performed live. Hoping for the blood to creep where it can't stop crwaling (we're ants!) I still hope for a Boerderij performance somewhere early 2014.