Morbid songs for Music Lovers. Basically that describes the whole evening, but since that is not a review let me give some additional information. On his way down to Loreley and back to Bospop on Sunday Steven Wilson made a stop-over in Hollands Prog Temple de Boerderij. As he said after one song this would be the same set as earlier this year, but since I missed the Paradiso show all was knew to me. 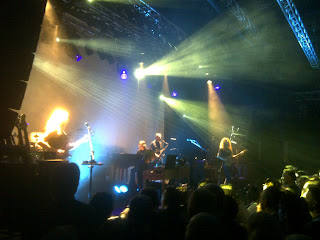 I have been following Steven Wilson now quite some years. In 1994 he played at the almost local Vlietpop festival, but I was in Roskilde that weekend. I read about their Pink Floyd influences and got an interest but no following yet. First Porcupine Tree CD I got was the live album Coma Divine in 1997 after which I also dug into their earlier releases. For me they passed through three phases with the more psychedelic Floydean early years, followed by the more accessable Stupid Dream / Lightbulb Sun phase and then they slowly grew heavier, maybe because of Opeth connections. I liked all three stages, but preferred them in Even Less mode. Than I also discovered his ambient work with No-Man and later poppier Blackfield. All at a high standard musically, but with different interest to me. Last year the long awaited Storm Corrossion was released and for an album coming from two recent musical geniusses (Mikael Akerfeldt was the co-operator) I was disappointed in the result (or need another 20 spins). Steven Wilson meanwhile also relased some solo albums. I got a DVD of Insurgentes and missed out on the Grace for Drowning album. This year however the turnaround came, when his last album The Raven that Refused to Sing completely blew me away. 6 dark stories of horror, death and loss were presented so beautiful that a live performance of this album could not be missed.

So the album was great, the show was even better (as it is supposed to be with great bands) The line up was the same as the album apart from the drummer. When I saw the new guy hammering away on the final part of The Watchmaker I guess even Marco Minneman was hardly missed. Guthrie Gowan I saw one year ago with his solo project, which meant incredible guitar display. Now playing in function of the song his addings were still unbelievable (Drive Home contains one of the best solo's of the year) Theo Travis added instruments I usually do not need on albums like Clarinet and Flute, but in this case defintely adds to overall doomy atmosphere. Nick Beggs on Bass and Stick manages to appear on two of the most interesting Prog Rock releases this year (Lifesigns is the other one) and showed why he is such a popular artist. Steven Wilson himself was in his element and more talkative then I remembered him from his Porcupine Tree shows. 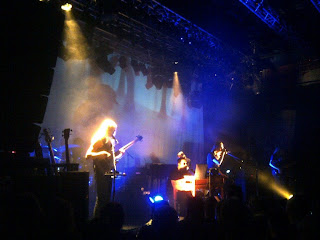 So the band was great and the show was long. Apart from the full Raven Album we also got songs from Insurgentes and Grace (which I now shall get as well) plus a nice oldy as encore in Radioactive Toy. According to Steven in the about 10 times he was in de Boerderij with his different bands he never played this and he might be right. I do remember though a brilliant version from Riverside when they toured Holland for the first time after taking Progpower by storm in 2004. Like all songs yesterday the closing song also had some impressive films and images passing along. This completed the overall impression of a show that so deserves to be seen and liked by audiences much bigger than the one that sold out de Boerderij. That was the main question remaining, especially after the emotional clip showed over this years dark ballad The Raven that Refused to Sing. Why is this man not a household name yet?  The number of people asking who?? when telling them I was going to see Steven Wilson still is sadly high. Finally I can state that on my way out in appreciation of the show I did get my 2013 summer Tee with a nicely morbid figure on a sunny shirt yet another impressive experience richer, what a year.