Holidays in Brazil also means prog rock and metal, but unfortunately the specialized CD shops in Rio (yes in Tijuca several are still there) did not have Maestrick on stock, so my holidays mainly concentrated on the Tricolor in Erikprogtricolor. For thos not knowing (shame on you) the tricolor in Rio is Fluminense, most sympathetic club in Brazil and while we are at it worldwide. Last year they were champions, but this year almost halfway things are disappointing somewhat with a 14th place so far and some support was welcome. 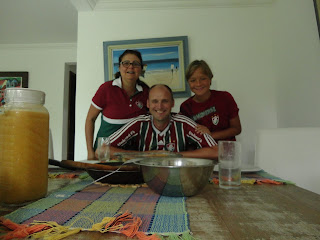 While in Buzios my support came from watching the matches on the street TV at the Botafogo bar. During weekdays the evening television games start at 21:50 hrs. since first the soap should end at main sponsor television channel Globo. Football is extremely popular, but that does not mean that football interest is defended by sponsors or federation. Another sad example is the friendly matches of the national team, which are played on same weekends or weekdays as the competition. This means for Fluminense that on some 12-15 matches out of 38 internationals Fred and Jean shall not be present. This has always been the case, but shows the complete lack of interest by the CBF in a fair competition.  Anyway last Sunday in Buzios was Fla-Flu day, so an afternoon match. While we were still very animated over lunch as shown above , the game was very disappointing and our minority of 4 against 40 supporters at the Botafogo bar was repeated om the field and resulted in a loss of 2-3. 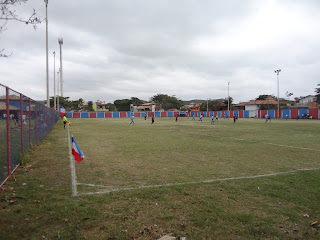 In order to show the other side of Futebol I also dropped by the two pitches near our home when the noise of whistles and shout woke us up early that Sunday. Buzios Esporte Club played modestly in Barca colors, but after some 10 minutes I found that probably 25 years ago I would have made the first team as well, since level was not exciting (although I thought maybe I was watching the veteran team, which means I have to recognize my level was lower. I also visited Branco-Azul Buzios (White-Blue Buzios) but that accomodation was being renovated. 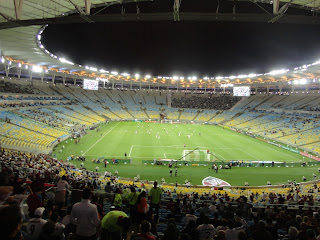 Talking about the level of Football the Brazilian competition is similar to the Dutch one. Not very good football, but due to the lack of predictability a very nice competition. Since many major players leave for Europe the competion is carried on teh shoulders of veterans, with most striking name Clarence Seedorf, who is the biggest star at Botafogo over the past 25 years and manages to get teh team on the top halfway. At Fluminense we have Deco (doping and injuries might justify retirement) Felipe (ex AS Roma) and Fred as the big star. Topscorer at last Conferderations Cup he unfortunately saves his efficient football this year for the national team, although he always gets his goals and scares opponents. Last week I told the family that we needed to return to Rio on Wednesday, since at least one match in the renovated Maracana I needed to see live. And so it happeed that at 21:50 hrs I saw the start of Fluminense-Corinthians. Among experts the Sao Paulo team is main candidate for this year's title with Pato (ex Milan) as most famous name. Flu was without Fred and Jean and had a very young team. As a result the match ended in a goalless draw and very few highlights (we should have had a penalty though). Still I loved every minute of it. I learned several new songs, stood up  90 minutes and the atmosphere was surprisingly positive after last Sunday's deception against Flamengo.  Still there is a comment several Brazilians made to me. The stadium is nice or even more than just that, but the old concrete rings were unbeatable. The sound from the surprisingly large supporters crowd from Corinthians did not travel to our side, which probably was the same to them. Also the shaking concrete, dirty toilets lack of chairs and importantly illegally sold beers, gave more of an atmosphere. This does not mean that I won't be back as much as possible, since Flu live is an experience not to be beaten on any football pitch.