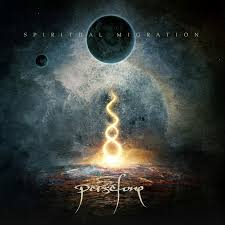 Last year Persefone toured Europe. While I missed them on the ProgPower Thursday evening show, I did see them supporting Leprous later that month. Going back in my memory and just re-reading my review of that show I did like their performance, but was not overly impressed with their vocalist, since I prefer the mix grunt/clear vocals over the scream/clear vocal combination. Still after receiving many raving reviews on Spiritual Migration, amongst whom some reliable sources to me I needed to check out this album. After many turns my conclusion can be that musically this might be the best album released this year, while the vocals are very good on CD. For those who see screaming vocals as a bridge too far to cross I still strongly recommend this album due to the five(!) instrumentals and many breaks that are simply amazing.

Spiritual Migration, so there is a concept of spiritualism here. This gives matters a personal touch to me, since lately Josie created a strong interest in these floating ideas, while I ...well I liked the goats and sixes during Hell's show a lot. So now I told her I bought this album in her interest sphere, she was pleased and open to listen. Unfortunately she definitely did not get the meaning of the screams, but shall give the lyrics a closer look one day. At the same time I just keep on getting blown away by the music itself. I do hear clear references to Zero Hour's in your face metal, while some more spiritual parts bring Cynic to mind. Those who joined me at the ProgPower 2008 (?) Saturday know that I rate both bands amongst my favorite performances of all time at that festival.

So now I am very much hoping on a fast return of Persefone to Baarlo, or de Boerderij for easy travel. This time I shall not be distracted by vocals and get into their previous work as well. It's a strange little world we bang in. One year ago Leprous was at its peak touring Bilateral and Persefone was just an OK opener, Now I soon shall start ignoring the somewhat disappointing Coal, while I will have many Spiritual Migrations to look forward to.
Posted by erikprogtricolor at 22:11