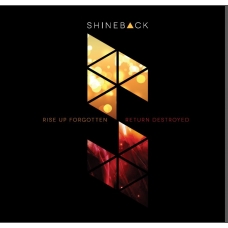 Lately several CD's have been surprising me positively and soon I shall review one on the heavier end of my taste. However. the one that most intrigued me is something completely different. The first solo album of Simon Godfrey. Simon was guitarist/vocalist of one of my favorite bands I never saw playing live Tinyfish. Once I had the pleasure of meeting the man during Mattfest two years ago and he was telling me that Tinyfish was hoping to come to de Boerderij the coming year. Unfortunately his Tinnitus forced Tinyfish to stop playing live and they never made it to Zoetermeer. Since you can't keep a great man down he now released his first solo album with some help of friends from the British Prog community.

Main surprise is the style which was announced to be more electronic musically and not a word was lied about that. Coming from Tinyfish (a prog-band without keyboards!) the step is quite big. On the other hand I do hear many similarities in quality and build-up of songs, primary due to the sympathetic voice of Simon. For those looking for points o recognition I can state that Matt Stevens helps out on some songs and the other favorite British musician I never saw playing live: Dec Burke (Darwin's Radio, Dec Burke band) adds some very nice guitars on Fears aren't Toys. Still this album is only for the open-minded ones. Simon to me dares to go where even likely open-minded band Galahad has not treat before. One final reference I need to mention comes back during the blogs. These are sung by Danny Claire in the role of Dora. Her breakable voice reminded me immediately of one of the most vulnerable pop ballads from the 90's You and your sister by This Mortal Coil.

I received this album over the mail last weekend and since played the album every day. main attraction is its difference, while filled with the also known great melodies, sometimes heavy guitars,  one of the better vocals around on Progland and even an epic in the title song. The story is about Dora and abuse and dreams recorded plus Envoys. All explained more detailed on the website www.shineback.org. I defintely would recommend this album to anyone who dares to take a risk, I still do not know if it ends up high on my end of year list after a week, but for now I want to hear it again and again, discovering new bits by every turn.

So it seems we lost Tinyfish and got recording artist Simon Godfrey in return. When I saw that he shall perform in the Peel in August when I am home alone and the family still on holidays a trip to Kingston Upon Thames was quickly booked. Now go and explore more on this release, some of you might like what they hear as well.