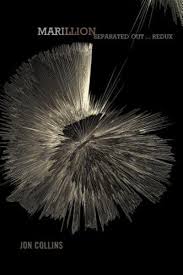 A book again. Yes, as a daily commuter and traveller abroad I have lots of time to read and listen to music. This one I read about in Prog Magazine and I was keen to get a copy this time. In 2002 the first version came out and soon it could not be found anywhere, not even at the infamous Marillion Weekends. Now we get the extended version and an update until 2012's Sounds that Can't be made. This book basically contains three levels for me. Some of the history I was unaware of, especially the early years and reasons behind the Fish split. Secondly a description of the creation of all albums with a to me (as not English mothertongue person) always useful background on the meaning of songs and lyrics.; Finally there is an overdose of quotes from fans all over the world, referring to the meaning of Marillion to themselves or their lives.

Now here is where I do not appear in the book and feel like adding some of my emotional sharings with Marillion. This might sound logical, since most fans are not quoted, but I do remember Marillion Weekend 2009 when I took the bus from Schiphol and ended up sitting next to the at the time to me unknown Jon Collins. He told me he was the author of Seperated Out (no copies available anymore, yes I asked), but we ended up speaking about global heating and the article he was on the bus writing on that.

Somewhere end 1982 early 1983 I discovered Marillion through the Kerrang Magazine. At the time Aardschok was released still irregular and Kerrang was the most informative magazine available in local record shops. When the debut album Script was released I got my copy fast and discovered a whole new world in the so called Prog rock music. That same year they had their first European tour which ended at the Parkpop Festival in my hometown The Hague. This festival is famous for being free and attracting crowds up to 300.000 people, but I can tell you that opening at 13:00 hrs in the afternoon there definitely were only a few hundred people watching with half of them early fans. Those who saw them were addicted and slowly they grew (Fugazi at Pinkpop a year later) to a band that could sell out major venues in Holland. The first albums with Fish were their best ever and as the book states when he left they lost the Heavy Metal part of their fan base. Looking at one of my two blog followers I can only confirm this is true. I never gave up on them and although unable to reach their levels from the eighties Marillion never released a bad album (disppointments OK, but never bad) and have released still some absolute highlights of modern Prog music.

When the fans speak it is all about emotion, which is not much different to me. Like everyone who faced an ended relation Script for a Jester's tear is a very relating lyric. Where the book states that Beautiful was a number one hit in Brazil, I am not too sure about that, but when I travelled that country by busses one year before moving I do remember the soap series which had Beautiful as their tune and gave me a safe feeling while waiting at bus stations in very remote corners of this huge country. Three and a half year later I would marry my wife in Rio and the first music I had played after the sim-word (yes) was Beautiful (It was a BBQ afternoon wedding so no obligatory dance or so). The first Marillion weekend we missed out since our premature son Tiago just came out of hospital after a three month battle. In 2002 we brought him along to Minehead and he had his first British Pub visit over the weekend, while we were astonished in more than one way with the Buttlins experience. The following year we had a stillborn daughter and during Taina's cremation we did play When I meet God and felt some of the questions and comments very appropriate. One year later when during the Minehead weekend this song was played twice I realized I never resolved emotional impacts and created my own monster by playing music I love at the saddest moment of my life. Two years later my company was taken over by our bigger brother and I refused the offer to join them in Switzerland. My farewell e-mail mainly consisted of a very relevant quote from a certain Mr. Hogarth: Heading for the Great Escape... going through winter slides and permanent holidays to the dignified walkaway. This went of course way over the heads of the majority of my musically challenged colleagues. When finally my life was supposed to end, but did not due to medical errors on analysis in my favour my head got messed up for good and during my frequent trips abroad Sugar Mice sometimes seems appropriate as well. But so far for Marillion's emotional impact on me and way to translate feelings into words already written by Fish or Hogarth. It is a comfortable feeling that when I die, divorce or look for the bottle too much, the soundtrack for the occassion is already in Marillion's music.

But this is supposedly about the book. Well I can recommend the read to everyone with an interest in the band (Unlike Anvil's story of Anvil which can be read by anyone with an interest in music). For those who don't like Marillion the book is of less interest due to the high part writing about the album recordings and songs, with many fans telling their stories of admiration inbetween. Being a forerunner on the internet use and having a US tour sponsored by fans worldwide is showing how different they are. Some point of criticism can be the too positive feedback on poorer albums, but here taste comes in and that can never be discussed. I enjoyed reading the book and now went through several CD's again realizing that Fugazi rules even with Hogarth refusing to sing any songs from the album. Also the split with Fish turned out to be good in a way that I now follow two bands with interest, still if ever a reunion show would be possible and in line with the Marillion weekends Fugazi would be played in full, ok encored by Grendel. I would be the one loosing his voice, jumping up and down  and rating it the best show of the decade, but enough of that.

Email ThisBlogThis!Share to TwitterShare to FacebookShare to Pinterest
Labels: Books