Now that the summer arrived as we like it, the free festivals come along with it. Most of the free festivals have a long tradition and the main ones in The Hague and are nicely spread over the summer. Early June it is Kaderock at Musicon with a mix of music styles, but many guitar orientated music (last year The Quill was preferred act) Then end June we have Parkpop in the Zuiderpark, which possibly still is the largest free festival in Europe, with nowadays around 250,000 visitors. In the past they had great names (Marillion, Diamond Head, Def Leppard, Fish, Thunder, Robert Plant) but lately the program is poor. Then end July we have Plein Open and early August Schollenpop on the beach at Duindorp, which if sunny is obviously the best scenery you can imagine. Finally neighbouring Wateringen has mid August Waterpop, where this year heavy music with Orange Goblin and Soltstafir makes a good return (but I shall be on holidays then) 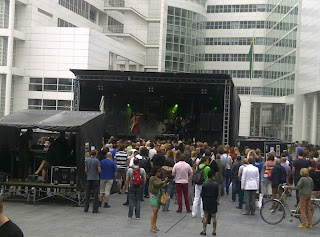 Plein Open is easily  at the ugliest location, being next to the Ice Palace, or our new city hall and Library. This week local politicians have decided that the Anton Philips Hall on the square has to be demolished for being replaced by the EUR 181 million (!?!) costing Spui Forum. Knowing that these costs shall double like with all government big projects, we can state that our local politicians should be protected against themselves and kicked out of our city soonest. The same people also decided to stop subsidising small clubs where local bands can perform, so obviously no heart at the right place, but status as main driver. So far politics. Plein Open the festival is easily the one where heavy guitar lovers best meet, since I can't remember a year without any metal band.

This year at 14:00 hours we got Ditch, a band in the stoner-rock corner and sounding pleasant with their thundering bass keeping the body participating. At 16:00 hrs. we got Vanderbuyst. This metal trio is probably the most performing band in Holland, since they appear everywhere from small clubs to large festivals. Their Hard Rock is very eighties with clear notches to NWOBHM and before. A small Thin Lizzy bite during soundcheck showed their quality already. They meanwhile released several albums and played own songs with one cover, this time being one of Herman Brood. Very good band and to my surprise 2/3 from The Hague as well. 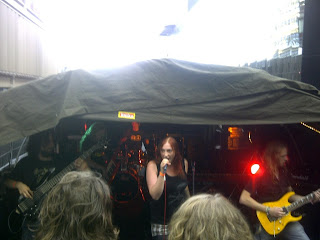 Than we had some hours of heavy drinking, catching up with friends and passing bands (Iconoclast with some psychedelic punk sound was best of the rest) until at 19:30 we got ReSolve. This young band mentioned  Dream Theater, Symphony X and Porcupine Tree as their influences I knew this would be nice to see. When I showed up at the second stage (which was a tent, not a stage) some minutes before they started the guitarist appreciated my Redemption T-shirt and mentioned this is where they are into. So they started with an own song and instruments played well and female vocalist thankfully  not going up the octaves, but actually singing. Than we got treated on a very decent version of Pull me Under. When they announced to slow down a bit The crowd (of how many?) did not want to know about that, but when the vocalist said they were going to play Undertow from Pain of Salvation all changed to me. This song also was played on my daughters cremation and made me leave the Sjiwa some years ago at Progpower. Nowadays I can listen to it live again without getting emotional but somehow I still can not stop shouting along with the lines like "Let me die, Let me break the things I love I need to cry" Again this version sounded good and the vocals obviously far from Daniel Gildenlow managed not to disturb me. Then we already got at the final song, which was an epic completed by a grunter as guest. I way passed the times that grunts would put me off and this song was another highlight. It seems that in The Hague we have now progmetal band to keep an eye on. Exactly the reason why this festival is so good for bands and audience. Meanwhile the sun came through stronger and stronger and I vaguely remember how I cycled home later that evening.