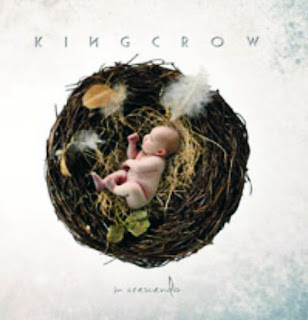 It took me some time to buy this album after it's release. Thereafter it took me some time to sit and listen with all attention needed for this album. First background listens made me feel the album being fairly light metal and the buzz on internet fora seemed exgagerated. But after a headphone listen of the album in one go I got it. One of the best releases in 2013 indeed and highly recommended to both prog rock and metal lovers.

Two years ago Kingcrow played the Progpower festival in Baarlo and I already knew their good album with the hard name to memorize. They managed to get on European tours with Redemption and Jon Oliva, so this gave them the opportunity to watch and learn with the absolute best. Listening to ths album they obviously learned, although staying away from the more metal side both these bands used to play live. Opener Right before still seems heavy, but hereafter the majority of the material goes on slower mode. This is not a bad thing since Kingcrow are at their best in the atmospheric parts where heavier slots move nicely into ballad territories. The band that immediately springs to mind hearing this album is to me Wolverine. The overall feel and atmosphere are not far away from their last album.

With such a strong album released I checked their website for a tour. To my surprise they played US and Canada and have now for a next show end November Rome mentioned. In the US they played with Pain of Salvation and judging by both last releases I can imagine they gave the headliners a hard time topping them. Just a matter of finding a good co-headliner (Haken September tour?) and get on that tour bus.