Galahad - One for the Record 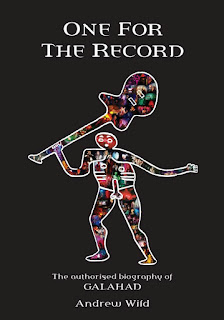 Music is supposed to be heard or seen in live form. But sometimes a good read can be just as nice.     Highlights to me are on never giving up and friendship Anvil: the story of Anvil (both the DVD and book are a must) or on all the Sex & Drugs & Rock & Roll Motley crue's the Dirt. This week I received the authorised Galahad Biography One for the Record by Andrwe Wild. Or as they subtitle themselves The World's most Famous unsuccesful band. This book seems to belong up there with the above mentioned classics.

Galahad is now one of my favorite prog rock bands, but I discovered them rather late during a show in de Boerderij some ten years ago (one of their 12 shows with Peter Wallbridge on bass as the book tought me). Their last three Cd's are absolute Classics in the Genre, because they dare to be different and meanwhile I did buy majority of their back catalogue as well. Being fan of the band to me is not a pre-requisit to like a book. It is about the story being told. That's what we get here nicely told. We see a relatively unknown band struggling with personal (6 Keyboardists, 8 Bass players) but always continuing their struggle. It is because of these bands and their fighting spirit that we can enjoy so much great music. It must be much easier to continue if you have a major hit, become a household name and every new release has a guaranteed offtake of 100.000 plus. Galahad never saw these huge numbers (as unfair as this may be), but always was prepared to go where bigger bands fear to thread. Their blend of styles make them hard to follow and sometimes I also get lost in electronics or rhythms too far from my dose of rock. Still appreciation is always there.

The book gives a good insight on reality of a band their calibre, with one of the highlights the descripton of a short European tour with breaking busses, a cancelation and too much credit to the Dutch in the three part interlude A Matter of Going. Striking is that all lost band members are positively looking back at their time with the band. All ex-members had their reasons for leaving or being told to do so and of course the sad loss of Neil pepper is also remembered.

For those not interested in reading, the book is still recommended. As a bonus a three hour DVD is included. Two hours plus of live recordings from 1986 to 2010 Night of the Prog performance. This gives a nice overview further enhanced by 6 videoclips. One clip deserves a special mention; e the Dentist song (a great song) is supported by a hilarious videoclip, which is so wrong it becomes funny again. It is not available on YouTube, so this clip alone already justifies all running to the Galahd webstore and get your own book. Apart from a great read you support a good cause.
Posted by erikprogtricolor at 13:09