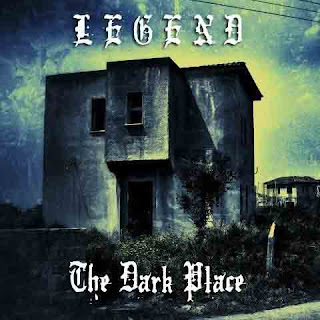 Legend from Jersey, a  band that did not break through to bigger things, probably because they are from Jersey. They released two LP's and EP's in the early eighties, which all are available on the absolutely necessary double CD Anthology. This month they played the Keep it True festival and one week before the show released this new CD: The Dark Place.

Starting of with a Maidenish Wasted Years alike riff the titlesong gets heavier hereafter and the typical vocals come in and the Legend returned indeed. From this begin to the last bonus track Play Your Game this is a very good CD. Like more bands of the eighties returning, they manage to keep their feet strongly in NWOBHM territory, while at the same time also know to avoid sounding dated. Musically they were not the heaviest in the Wave, but melodic and moody. At the same time songs as Paragon and Burn with your Demons are not too far from the mighty Angel Witch.

While the last months Progmetal has not been overly active on great releases, the Prog rock and Heavy Metal make more than up, I do hope that the trip from Jersey to Holland is an easy one, since they state themselves on their website after KIT that they hope to return to Europe soon (British bands and people alike do not consider Great Britain Europe for those who did not know). Cannot imagine that they disappoint live with this backcatalogue now followed by a great CD
Posted by erikprogtricolor at 20:15