Whitsun weekend usually sunny and traditionally camping out with a group of friends. Not this year though. Last week at my annual football tournament I managed to break my wrist and someone forgot to inform the gods that spring started. Together with a little animated family for camping enough reasons to stay home and a good opportunity to attend the Progdreams 2 festival.
Progdreams is the new name, but basically IO pages festival and symforce were its predecors. Announcements of the band were made again by the sympathetic Belgian Bobo Bollenberg. Apart from informative (let's hope the rumors on a certain drummer and next year's festival come true) he also blends in a humor light without any insults taking place (which is more common in the region de Boerderij and I are from).

First band was Beardfish. Saw them several times before and like them live better than on CD. Again the show was lively and entertaining. Strange enough they opened with a set of 40 minutes only, while having released much more music than the next two bands. This resulted in a short set of only 4 songs with to me as highlight the closing song. This was pure progmetal with vocals even leaning towards grunting. A full album in this style without the Zappaesk escapes would be a to me defintely their best release. Great musicians good opening. 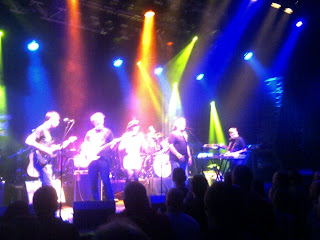 Than there was a long queue for food, so I had some beers. I drink right handed so plaster not bothering too much. Next band on was District 97. Through the announcements a songfestival atmosphere was created and to me they were winners of the day. When the young band came on the T-shirts of Meshuggah and King Crimson raised hopes. Indeed the music was flavored with tech metal influences, played in a very tight way. Unfortunately to them they shall always be called the band of former American Idols winner (or finalist?) Leslie Hunt. This does not do justice to the band. While she presents enthiusiastic enough the band abilities were the standout of the show. There was a split in the set, when halfway John Wetton joined to sing their last albums duet the Perfect Young man. Hereafter we got treated on some Wetton era King Crimson work. Again played very well we got some classics and less obvious songs as The Great deceiver and One More Red Nightmare. Only comment on this tribute part is that the speed dropped somewhat and maybe their own songs were more lively. Still I never saw Fallen Angels being played live before and Mr. Wetton was in very good vocal condition. Highlight of the day, got their last CD which matches the show.

Next band was Sound of Contact. Who? right the band from the son of Phil Collins. Obviously this seems to be enough reason to program them here halfway the set and get them a place on Night of the Prog festival. Afraid I did not get the buzz. Simon Collins looks like his father, but the band played to me a rather poppy prog and songs did not stick. Guitar was not present enough, so bartime to me. Maybe after knowing their CD the penny drops, but after this show I was not tempted to buy their album and hearing audience reactions I was not the only one thinking this. 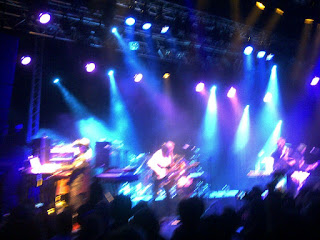 Closing band was Spock's Beard, which was a good choice since guaranteeing a nicely packed Boerderij. I somewhat lost track of them after Neal Morse left, but was curious to see how Ted Leonard would fit in. First time I saw both Ted Leonard and Spock's Beard was in 1998 when Enchant supported the Beard on their European tour. Being a fan of Ted Leonards voice and Enchant I quickly found that the renewed Spock's beard is up to top levels again. The set was obviously build around the last CD with Ted's songs and reason enough for me to get Brief Nocturnes and Dreamless Sleep afterwards. Having released 11 Cd's the problem is always which songs to play live. To me all of the old songs were a surprise since not the typical highlights of each album. Walking in the Wind with guest drumming Colin Leyenaar (where is the Alpha Flood CD?) was very good, but the chosen ballad Distance to the Sun is not really my favorite SB Balled (Waste Away is). With so many new songs and the average song being long there was hardly time for a best off show, but I was glad to see I shall follow the Beard more closely again. Ted Leonard did not look fully comfortable blended in yet to me, but his voice makes me already look forward to this years closing set of Enchant at PPE.

So the festival was a success and de Boerderij filled up nicely. Problem in my eyes on next year would be how can they get a headliner of similar league to repeat the turnup. Leaving that for the organizers to worry about I am already looking forward to a next edition.