Michael Schenker on Tour with the rhythm section of the Scorpions, his loyal bandmate Wayne Findlay on keyboards and guitars plus great vocalist Doogie White. That sounded like a walk back on memory lane to a great part of my musical canon some 35-30 years ago. Or to go short a show I would not like to miss and how I turned out to be pleased with that decision. 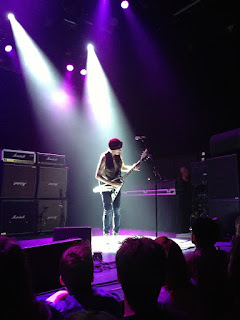 Michael Schenker is simply still the best guitarist around. 30 years ago I voted him best guitarist in the annual Aardschok poll and after seeing this show I shall in 2013 repeat my vote. He seemed to be in pretty good shape. That is for Michael Schenker terms, since let's face it he shall never appear on the flyer of your local fitness club. But apparently in good mood he gazed smiling into the audience, while meanwhile with comforting ease going through his typical melodic solo's during old MSG, Scorpions and UFO classics. The solo in Rock Bottom was perfect and never ending as usual, while my highlight live shall always be the instrumental that dwarfs all other instrumentals: Into the Arena. 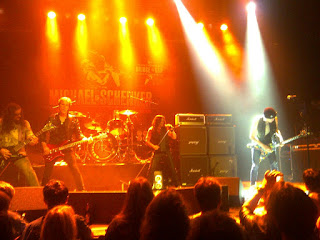 Bringing Francsis Buchholz on bass and Herman ze German on drums indicated that we got treated on various Scorpions classics as well. The tour being called Lovedrive reunion meant we did hear half that album, but also got Black Out and Rock You Like a Hurricane. With Doogie White on vocals these hits even sounded better than any Scorpions version I remember. Talking about Doogie White he did a great job. He can stand in for Klaus Meine and Gary Barden easily and while noone can really copy Graham Bonnet or Phil Mogg he did a great job on their songs as well (yes we got Assault Attack!). Inbetween songs his Scottish accent nicely differed from the German dominance on stage. Yes Doogie we remember the Archie Gemill goal, but do you remember the Johnny Rep one which made it basically pointless. Doogie shall release with Micahel Schenker a new album Bridge the Gap. After tonight I shall get this after release and Horizons played already sounded good. We also got a recent MSG song "Before the devil knows you're Dead" as a tribute to Ronnie James Dio, John Lord and Trevor Bolder. 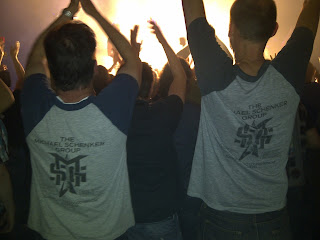 A show like this is the perfect proof that great hardrock from the late seventies and early eighties is timeless. I could and did sing along for one and a half hour (that includes the "Into the Arena" melodic solo in the end). Simply no pretentions but only Classic Hard Rock are a very welcome guarantee for a great night out as Magchiel and Douwe also confirmed. With Michael Schenker returning almost every year, so shall I to his shows.