It's Friday night and Pendragon are back in de Boerderij. So we know what we get. We get well over two hours of one of the (if not the) best prog performers. We get sonic landscapes by Clive Nolan, we get the stable bass playing by army-trousered Pete Gee, we get Scott Higham on drums bringing the sound closer to Hardrock with his past in bands like Angel Witch (them again) and ShadowKeep. And finally we get the sympathetic voice of Nick Barrett together with his guitar playing from another planet. Predictable you think; well think again. Since they have a great history to pick from, they always manage to throw surprises into the setlist. Tonight the biggest surprises to me were The Black Knight and the song I do not have on CD Fallen Dreams & Angels. 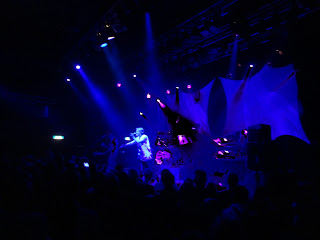 Starting off with an epic The Voyager the tone was set. In spite of talks on recovery from an operation it all sound very good as usual. After an easy start we didn't get an uplift with the equally beautifull The Shadow. Pendragon is one of those bands who to me don't have a favorite phase. Maybe The Window of Life is my preferred album, but already before and upto now they released albums almost as good. One of my absolute favorite songs by them appears on the last album Passion, being This Green and Pleasant Land. Starting with the emotional thoughts on how we pissed things up the wall  untill arriving at the sing-along Take only what you need and be on your way, this song is almost 15 minutes in Prog Heaven (well maybe without the jodeling). 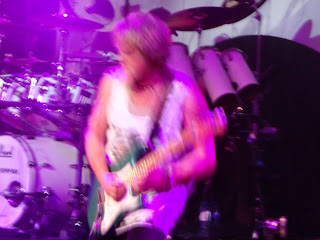 Talking about great songs, this set would consist all their hits and some surpises. Well obviously they never had a hit for the masses, but in progland for sure Breaking the Spell is considered one. This song is build around a never ending guitarsolo, like no other song I know. Nowadays when hearing the song I always remember the German guy standing next to me some years ago at the Loreley, spontaneously bursting into tears when this song was played. It could have been his wife/girlfriend who broke the spell, but it could also have been the guitarsolo. Yes it is that good and emotional. In this month's Aardschok Pendragon's last live CD is reviewed and the bold statement is made that Pendragon Live never really matches their level reached on CD. Well to me only witnessing and feeling the emotion all around when Breaking the Spell is being played completely destroys this statement. For those who never heard this song go for the easy way and check YouTube.

Closing the set with some recent work we got two 10 minute plus encores in Indigo and The Master of Illussion. With Pendragon there is always wanting for more, since they have so many great songs. For future surprise shows I do have a small list of requests, which are more than welcome for me to include: 2 AM, Shane, World's End, Bird of Paradise and I can go on forever. During the show they suggested to make this an annual event (weren't they doing that for some years already?) so please include the above songs on the 2014 Boerderij visit.