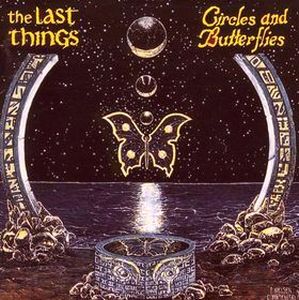 Sometimes memory is short and needs to be helped out by a small walk through the CD collection. Today I ran into Circles and Butterflies by Progmetallers The Last Things while doing so and remembered that upon release in 1993 it hardly left my CD player . When listening to it again I did what I do in similar cases: check the internet if they still exist or released more albums and read what has been written about them in the best and most complete book ever written on progressive metal: Mean Deviation. First discovery was that for some reason Jeff Wagner missed out on them in Mean Deviation (still the book is an absolute must-read for any progmetal fan though). I thought some important missionary work was waiting for me, but on Progarchives and the Metal Archives they are mentioned and some information can be found.

First name I recognized in the CD booklet was guitarist Matt Laporte who passed away last year and recently became known for his work with Jon Oliva. Here he was last to join the band and does not seem to be one of the writers of the album. Bass Player Darren Mc Farland played live with Atheist (an influence in some of the heaviest passages of the album) while drummer Lou Buffo and Richard Elliot vocals and many instruments came from predecessor Blackkout.

The album starts with six interlinked songs and the highlight of this album. Starting with Inside the Circle until The Circle Ends we get a range from technical trash metal, prog metal, ballads and progressive rock ending in an impressive instrumental piece. While hearing this back a smile came up and I remembered why this probably appeared in my 1993 end of year lists at a very decent position.The five songs following this suite can't completely keep the high standard, but still show a wide range of influences, instruments and very listenable songs. If there is a criticism on this album it would be that the production and general sound of the album could be better. I do not know if in 1993 this was a valid comment, but today it sounds like needing an upgrade in heaviness.

The good news for interested readers is that the Greek label Arkeyn Steel Records re-released this album last year, with an additional demo from 1994 and a DVD from a Blackkout live in 1990. With big bands in our genre I tend to have the feeling they should be so much bigger already. For bands like The Last Things matters are even worse, risking to be forgotten while the quality is here and subsequent albums could have lifted them to the topleague culminating in a slot at Progpower Europe.