Alan Reed - First in a Field of One 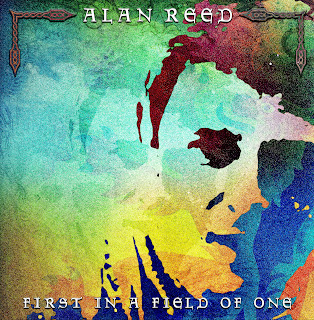 In these times where due to recent purchases I am very much exploring modern-technical-death-metal-like bands and return to my younger days during the rise (and fall?) of NWOBHM. This CD brings balance and can be played  at home without a headphone or comments.

Alan Reed the voice of Pallas, untill some years ago and then there were two. Last year in a fairly short time span I was lucky enough to see the renewed Pallas who became, much to my liking, even more hard rocking as well  as Alan Reed solo during the illustrous Mattfest in The Peel. Alan was still suffering from his unvoluntary departure from Pallas and emotions  looked pretty similar as if his longtime girlfriend  just broke up with him.During the song Darkness has Spoken some of his emotions are described with words as cold, hate, lost control, vengeance, disbelief. Luckily the last line is "The Darkness has gone".

Hopefully Alan is at peace with himself and his past, because he just offered us eight great songs with celtic, acustic flavour and always leaning on still one of the best voices in progressive rock. Musically he is helped out by Mike Stobbie on keyboards and Scott Higham on drums. Some additional work from to me better known Christina Booth (Magenta) on vocals and Kalle Walner (RPWL, Blind Ego) and Jeff Green on guitar. So I hope this band comes to de Boerderij and Jeff Green joins, giving me the chance to shakes hands with the guitarist that I had short email exchanges with over shared emotions and experiences beautifully expressed on his album Jessica.

After seeing Pallas and Alan Reed I already mentioned on my then Dutch blog that we the audience might end up as winners getting two different good bands coming out of one. Now that I own XXV and First in a Field of One I can only state that I was right. Long life unjustice and musical differences.