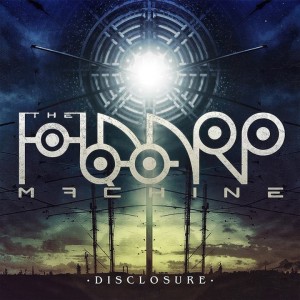 Advantages of being modern: You stay open for new trends,  accept grunting and screaming as decent forms of singing and suddenly a wide stream of modern bands are very listenable. I have discovered several great new bands recently, who are in one way or another hanging inbetween Djent, Progressive, Extreme and another 20 styles ( I won't use Sumerian Core called after the label). Stealing Axion (how did they end up at Inside Out Label, being far heavier than 99% of their releases??) released an interesting album in Moments. Than I bumped into Intrinsic by The Contortionist. When Aardschok mentions in their review that you must love Rush and Dream Theater in order to appreciate them and style breaks are happening every other second I start surfing the net. It's one of the beauties of today that with Youtube, Bandcamp, Myspace etc. you can quickly get some songs on your PC. Very different indeed, but I can only recommend on YouTube their clip of opener Holomovement. What a great song that is.

And now I discovered Disclosure by The Haarp Machine. Bought last of the three and heard less, but probably the best of them all. Where they start with a contradictioness winner is the short playing time. This is very intensive music. You need a series of headphone listening sessions before the music lands in the brain. Stealing Axion over one hour is a lot and The Contortionist with their 45 minute release already comes closer. By keeping their CD at 33 minutes like the greatest bands in the Tech extreme corner (Cynic and Atheist) The Haarp Machine make sure that the attention can be kept from start to finish.

Opening instrument on the CD is a Sitar, when this changes into a Heavy bombastic opener followed by a blasting Death metal passage relief is the best word to describe the feeling. Next to a Sitar also a Koto (a what?) is mixed in the music, but never to extends that annoy. Actually it adds flavour to the very diverse music. So what do we get on vocals. A range from pretty heavy vox to a clean vocal that is very good with the music. Similar for the music, we move from extreme bashing to soft progressive instrumental passages. For those of us who can't get over extreme vocals (almost everyone I know) should try the album closer Machine Over. If under the impression slowly find more songs and maybe it sticks.

I read on their facebook page, that they shall play Tilburg in March during the Neurotic Death Fest. Since I get an ever growing collection of technical death metal bands and definitely would like to see these songs live I might decide to pick one, two or three days of this festival for a change. Eyes on the band announcements and ears on Disclosure.