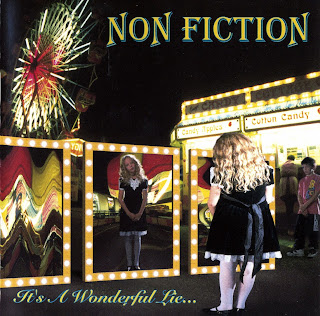 Sometimes playing an old CD leads to another one and before you know it you bump into a candidate for DMJGH. Last Saturday I listened again to Autumn Hour, the last output (2010) I have with Singer par excellence Alan Tecchio. By hearing his great voice I switched to Hades, one of the best ever techmetal bands (or where they called speed-, thrash- or just Heavy metal at the time?). Alan Tecchio has this great range from the high screams to the aggressive low vocals, but always very melodic and heavy at the same time. Live I saw him with Watchtower when Het Paard in my hometown still programmed great bands and once as support band of Savatage in the infamous "Scum" in Katwijk with this lot: Non Fiction.

Watchtower released an all time Classic album with Mr. Tecchio on vocals, Hades whole collection should have been heard by millions, but never was and Autumn Hour shows again that his lyrics usually are away from cliches and show some concern with our planet, life or social circumstances. Seven Witches I've only heard but do not have on CD and Non Fiction is defintely the slowest band in his carreer, while at the same time probably the heaviest as well. Here we get 17 songs in 52 minutes, which includes several shorter instrumentals, some mid tempo work and bass driven slow moving machines like "Reasons" or "Picture Imperfect". Amongst this diverse collection happens to be also one of the most catchy opening riffs and vocal  melodies ever written jointly: Sad & Done.

In comes  Mr. Dan Lorenzo. Also from Hades/Non-Fiction and co-writer of most of the album and guitarist who knows how to write a good riff (see the Hades Anthology for proof) This album does not evolve around one song only (number 11 would be a strange place anyway), but this song is highly recommended to hear at least once. The booklet mentions for this song also credits to bass player Kevin Bolembach. I do not know how the writing occured but do know that whenever I hear this song back the opening lines are sung along out loud or just in my mind:

"Oh let me cry on your shoulder cause my backbone is broke, I used to try to be bold but that was such a joke" and right they are.