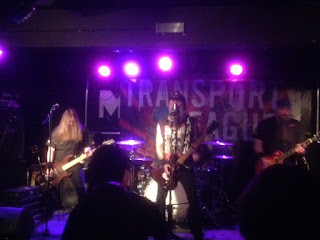 We have this week a summer upon us, so the beaches are full. To my surprise Musicon was also pretty well filled up this Tuesday night, with a turnout many a Friday or Saturday night I attended would not meet. This all for Transport League a band I hardly knew. As openers we did get Onegodless grooving at us for some 50 minutes. This band hit the Musicon stage several times before from when they were called Mourn until the days of Onegodless. I therefore saw them a few times before and this show gave me similar feelings as their earlier appearances. This is a good band where some of the former bands of band members might mislead you (Cynic, Textures, Exivious). The music they play has a very long name on their page, but groove is the base for me. Bringing the songs fast after each other, I missed some connection with the audience. Songs were hardly announced and we rambled on basically. For me the vocals could vary a bit more as when screaming less and singing more there weresome added mood swings. Still a good live band, who probably shall return more often. 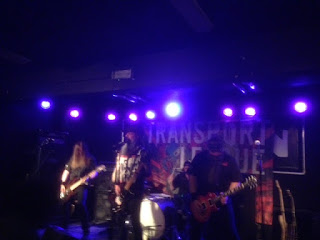 After a short break the long bearded men of Transport League took the stage. Now I did not have any music of them, but used to own a CD by B-Thong, which I lost when an idiot decided to force my door in the mid nineties. Finding nothing of any value in my house he/she took several CD's from my then starting collection. So not even being able to hear that album again I went through some clips on the internet and thought this could be interesting live. Well I can be short, this was a total party. What an awesome live band they are and how well they understand what live music is supposed to be all about. Describing their musical style is easy as I just can quote some album titles. The new CD is called Twist and Shout at the Devil. With earlier album titles  as Boogie From Hell or Superevil you get the ballpark we are talking about. You can also simply call it rock ad roll, but with a swing that makes it hard to stand still. Funny to see that the guy getting them to Musicon turned out to be their biggest fan jumping and banging around for the full show. The raw voice even turned Ozzy alike when we were asked to be silent for some vocal intermezzo. At the same time Motorhead was on the back blended in as well. So when I was wondering and deciding if I should get a souvenir (CD/Tee) from this show they played Zulu Zombie Zodiac for us which was such a delicious rampestamper that even the choice of album was decided. When later Kill Kill Faster was played I first heard Kill Kill Vasco, which would have become an anthem in football stadiums all over Brazil apart from Sao Januario. The show maintained on a high until it was all over. Well was it? Musicon turned on the music and instruments were put aside, but many of us were hungry for more. So we got more in two extra songs, where we could soing along to You've got another thing coming. I was hoping for a nice show on a Tuesday. Never could I expect such a party in such a full House. The band also seemed to like the evening as Hell bent for Tuesday and The Hague rules. Well we don't get that all that often, so thanks to Olax for putting this show together. Sweden ruled once again. Their countrymen of The Quill are not that far in style from them and turn into some sort of Musicon houseband. I would not mind seeing Transport League returning frequently either. And to continue the Swedish cloud we can attend this weekend another nordic show, when the Dead Lord /Horisont tour hits Holland. Skol.
Posted by erikprogtricolor at 11:14