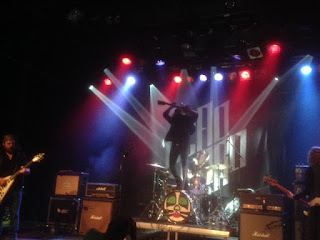 Sweden is delivering bands at the top of any musical genre I love. These two bands play hardrock with a strong seventies vibe. So when their Time and Ignorance tour hit Holland I knew I wanted to see one of the three shows. Now Zaandam was closest to home, but on a Sunday less tempting. Also due to late start trains woud not run home any longer. So it became 't Beest in Goes. an almost two hour drive, but on a Saturdy night less of a problem. Actually it brought me for the first time ever to the city of Goes, which turned out to hold a small port of yachts, a church square full of terraces and a nice venue in 't Beest. I know this all as we arrived somewhat after eight when the venue turned out to be still closed until 20:30. Now originally there was a local support band and the event mentioned 20:30-23:55. Goes is situated in the provence of Zeeland in Holland. Now Zeeland is in Holland famous for people being tight on their money and the bible belt starts here. Based upon that I did not expect the show to continue till after midnight. Not knowing the support got cancelled Hans and I turned a bit nervous therefore when close to nine noone hit the stage yet. 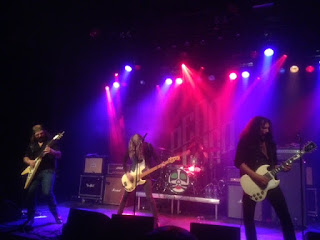 Comes nine ó clock and Dead Lord starts their intro tape. During the Heads Held High tour I did see them twice, but both occassions as support getting some 40 minutes only. So this time I was looking forward to a shared headline set. Now Dead Lord are the ultimate tribute to the twin guitar, so it was not long until opener Don't Give a Damn that guitars would come to the fore. Actually all songs by Dead Lord are not overly long and have great instrumental parts in them. Tonight they passed through all three albums and you have to get enthusiastic seeing this energetic band on stage. Unfortunately it turned out that in Zeeland enthusiasm is showed by hanging at the back of the hall (tight on money and feelings?). Reactions or not Dead Lord stormed on and occasionally Hakim would explain to us that the beautiful power coming at us was The Electric Guitar!!! Well no need not to mention the rhythm section as especially the drums were very tight and full of fills. Higlights? basically the full set as songs are in a similar vein, but if forced to choose it would be When History Repeats Itself, as this is just such a great song. Dead Lord rocked us with their rock again. 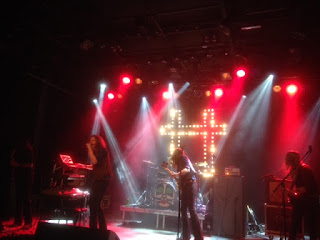 Horisont were to close the evening and I was very curious how they would sound live. Last year they released the splendid album About Time.  Although being their fifth record for me it was their introduction. When a supporting tour hit Holland I missed them due to shows being far away on a Sunday and Monday evening. As about Time made it to my Top 17 of 2017 I definitely did not want to miss out again. With the stage ready the difference were the added  keyboards of vocalist Axel. Further we got the classic two guitars, bass and drums. Opening with Odyssey it did not take me long to realize that this band is awesoem live and we would be in for a Masterclass of Classic Rock. The ease with which Horisont passed moods was remarkable and all your heroes from the seventies left their traces (Heep, Led Zep, UFO, Purple). To Hans and mine disappointment Zeeland did not seem to bother all that much. While reactions during Dead Lord were already far from Saturday night live, during Horisont half the people seemd to have disappeared altogether. What a miss as this turned out to be an absolute high of a show. Knowing only one of their CD's was no handicap at all.  Horisont are a class act and they would deserve more noise coming back at them. Well I loved this show and definitely shall follow their career closely on and travel for new visits. After the show as souvenir I intended to get the Odyseey album, which was not available so I got Time Warriors. Further again a scandinavian band toured Holland/Germany not bringing anything larger than XL. During the Trial show I learned that after washing a Swedish XL, you might end with a Dutch L and that does not work. Pity as they had some nice Tees. Finally we only wished this same evening and number of people in would have been held in Little Devil. I am pretty sure that it would have been a night to remembre not only by the bands, but also by the atmosphere. Tonight they play Zaandam, hope people are louder in de Flux. Anyway another Swedish winner we had, so my list of best gigs 2018 in December might end very blue and yellow indeed.
Posted by erikprogtricolor at 10:33