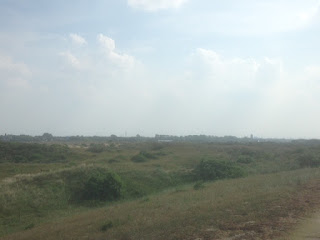 Het Westland is the region immediately south of The Hague. It is known for holding the largest glasshouse area of the world growing our vegetables and plants high tech. Being a farmer region and conservative/religious any amateur antropologist knows that youth needs to rebel. In the eighties this was often in the form of Heavy Metal. Many times we cycled to the region watching dutch bands on tour. This day the fourth edition already of Westland Metal Meeting was organized, but for me the first time. With Monster (what's in a name?) not being that far and the weather being beautiful I decided for a bicycle ride through the dunes to reach de noviteit.  It turned out that this was a party centre and outside they created a nice area with standing tables, chairs, shade and food. Inside the place also seemed well prepared for a festival and the only thing that stood out was that nowadays the youth in het Westland is not into metal. Where were they? 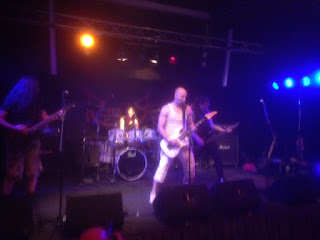 The formula of WMM has been through the years cover bands alternating with originals and blending styles from hardrock to extreme. As I decided to watch at home first the finish of 2018's biggest sport event (Giro d'Italia that is what an edition, world cup without Holland shall be lame and Max Verstappen is just a shitty driver) I missed the first band Melting Eyes. Theo told me upon arrival that they were rather good. My first band of the day would be Deep White, a coverband. Now Whitesnake was huge to me when getting into hardrock and yes I prefer the Moody/Marsden days. This band played songs of both Deep Purple and Whitesnake, not always the most obvious ones and did so rather well. The vocalist was good although his screams were better with Deep than with White. It looked to me like he was saving his voice knowing Child in Time was still to come. That was the best performed song of their set. Next band were substitutes Rages of Sin. Unfortunately Anatomy of I couldn't make it. Also playing Death Metal Rages of Sin played a nice tight set, where the presence of the drummer's 3 year old daughter before and on the stage was one of the highights. 15 June they have a release-gig for their album in HPC. Based upon their today's performance highly recommended. 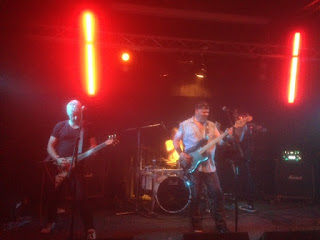 Standing at the earlier mentioned high tables and trying the sate with bread for dinner I managed to miss Rise of the Woods. Knowing them from earlier  shows maybe not that smart as they play a nice blend of stoner and hard rock. Being local they attracted most reactions from the audience as well.
Hereafter came the band that made me cycle down to Monster: Savage. One of the many bands that were part of the NWOBHM, but to younger people got known due to Metallica covering a song of them. Loose 'N Lethal, was a classic in the genre and the set would contain many of those songs. Unfortunately het Westland  seemingly had other things to do. While this band would have attracted full houses in the eighties, now only a few older fans were present and enjoyed this set. Mixing old and new, for me the highlights were those from our collective pasts. Songs like Berlin and White Hot were brought for us real good and closing their set with the usual double Ain't no Fit Place and Letting Loose made me a happy man in spite of the empty party center. As I did not stay for the last coverband bringing us Ozzy/Sabbath songs I decided for a slightly more dangerous ride home through the dark dunes with a few beers in, but managed to stay on the path. Thanks to the organization  for this party. My recommendations for such a diverse bill would be next time shorter sets and inbetween breaks. Not that this was an issue with the beautiful weather of this day, but it might keep the speed in the day.
Posted by erikprogtricolor at 13:45