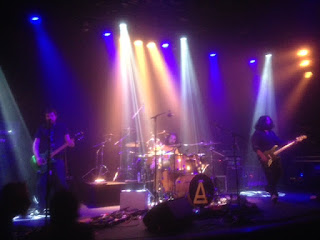 An evening of bands that are getting exposure in Prog magazines and sites, but are in my ears no real prog. Still I was curious so off to de Boerderij. Awooga opened the evening, three bearded blokes from Britain. Looking like a stoner band, I was pleased to hear that te base was stoner indeed. Rather nicely they went through songs from their last album Conduit, which I heard through bandcamp on forehand. Many pedals on the stage helped them getting the sound very wide and multilayered. Turned out to be a nice band, playing mainly heavy. Being their first time touring Europe and Holland we can appreciate the comments on great venues we have and forgive the cliches on coffeeshops. I liked their set and a highlight came in Witness mixing calmer and heavier moments. Good live band and fitting well to open for the headliners tonight. 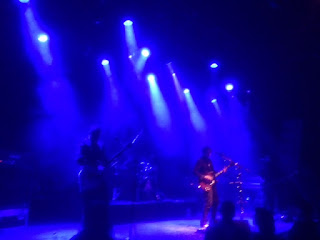 Amplifier falls for me in a typical category of bands. Those bands are not playing any of my favorite genres like hard rock, any type of metal or progrock. Yet they released somewhere down their career and (often double) album that is generally receiving rave critics. Listening to it I also dig it and that is where I stop often as well. Examples: The Smashing Pumpkins - Mellon Collie, Nine Inch Nails - The Fragile, GY!BE - Raise your skinny fists.... All these bands border my favorite music and Amplifier does so as well and their Epic album is called The Octopus. That is one beautifull album starting like Pink Floyd 1970 going through alternative rock, hard rock, grunge , psychadelic and you name it they include it. Now in 2014 they played Graspop and I remember friends skipping them and reviews being not that positive. Also I noticed that my Prog or PPE friends on FB were not interested. Yet open minded me decided to go alone anyway. In de Boerderij noone else was supporting Czech Death Metallers Hypnos, looking at the dresscode of the audience. So when Amplifier came on in black, with black shirts and ties it all fell together. The audience danced to this guitar rock band. They went heavy at times, but never got metal. They played very well, but were not bothered to interact with the audience all that much. Even the Wayne Rooney lookalike on guitars did not change much to that effect. And suddenly I got why this band were and would be misplaced on a metal festival. Further I saw by chance over the last week such great performers and atmosphere bringers, that to me this stood out as rather dead. Conclusion: They played well, the variation of styles was also live present, but they could not draw me into any song or mood. Most fans liked it pretty much, but for me one hour was enoug of this and I went home knowing that I can always play the Octopus and hear they are a good band indeed. Next time I decide to go to a band bordering on prog and alternative rock it shall be Dream the Electric Sleep again, who do rock and metal you into their show.
Posted by erikprogtricolor at 11:36