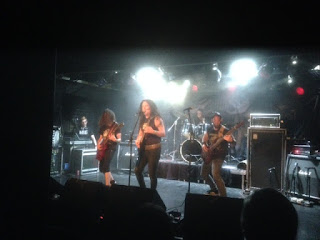 Thrash metal in Baroeg on the eve of a national holiday so off to Rotterdam. Now in The Hague our week of summer ended in the afternoon already so jeans and hoodie were in place. Arriving 25 km further im Rotterdam it was 5 degrees warmer and most people came in Anthrax outfit, being bermuda's and Tees. It was during opening band Defazer that most people arrived, so when they were finishing the Baroeg filled up well enough. Defazer is The Hague's pride of thrash metal and seeing their full set was the usual quality we came to expect from them. Opening with their EP Order out of Chaos I even start recognizing some of the further songs in their set. Well played, Baroeg warmed up and William wearing the coolest Tee in metalland (THHMA). 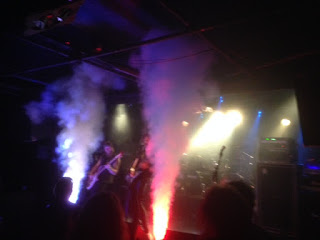 An outside break where beers were allowed on this warmish evening and Distallator prepared. This powerfull trio must be one of the best thrash bands in Holland nowadays. Their metal is fast and guitaris Laurens mixed his raw voice with lots of high screamed lines, which works rather well. Talking about working rather well, their smoke machine was no slouch either filling up Baroeg with dampened layers killing beers and eyes. This show only confirmed their status and they are one of the best options in Holland for sharing the stage with big foreign names. 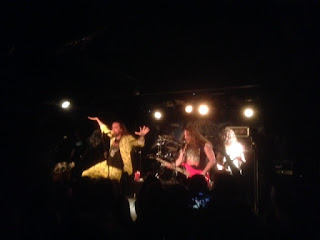 The big foreign name of tonight was Gama Bomb from Ireland. Well actually I do not know how big they are, but I saw them appearing often in Portugal's Loud magazine. Tonight they would start a small European tour playing their older album Citizen Bain completely commemorating 10 years since release. Now I do not own that CD, but have their last album. This meant I did not recognize a lot of their songs and many they played. Most of their songs are not very long. Not that short as an Hang the Pope , or the Ballad of Jimmy Hendrix, but not passing three minutes either. Citizen Bain also already gives away that humor is important to Gama Bomb. So what was the result of this all? A very tight band, a funny vocalist with a great Irish accent and an interesting yellow suit. Plus many songs with sometimes a bit long breaks inbetween. Vocals would not only be typical Thrash harshness, but also lots of eighties screams inbetween. And yes some people in the audience can do that too. All in all I quite liked the performance as this was entertaining. At the same time there was the risk of the gimmick taking over, but I guess they just managed to avoid that. Whatever you feel about them, no need to get bored.  Taking matters not all that serious is in a way also refreshing within the Thrash metal scene so who knows 9 July Lisboa for a repeat.
Posted by erikprogtricolor at 21:37