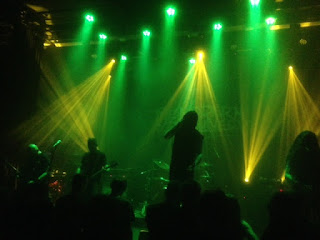 The Hague Metal Fest the first edition. Well I had to attend and support, even with Josie over for a long weekend. When this festival was first announced their FB page posted a poll asking which styles of Metal we would like to see. I believe I aksed for Progmetal, Heavy Metal and NWOBHM. Well my vote went up in smoke as in the end we got a pure Death Metal festival, where variation had to be sought between more technical forms or the slamming version. My favorites would play around dinner time, so I arrived when Modus Operandi, Human Vivisection and Astarot had already finished. Openers were for me therefore Apophys, playing my preferred more technical style of death metal. Not by coincidence just before they begun I did run into Alex, Cailyn and Jonathan, three of the Progpower regulars with a liking of the death metal side of prog. 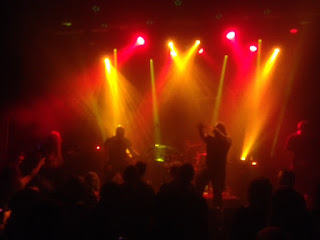 Apophys on stage turned out to be a litle party as they play fast, tight and varied. The vocals would go from grunt to occassionally very fast. Not knowing any of their songs I can't comment much on their setlist, but just saw a band that gave us a good show and  was appreciated by those in the hall. To my surprise not much signs of a pit going on, so maybe they are not yet that big after all, while for me the second best band of the day. My favorites of the day would be The Modern Age Slavery from Italy. Last year they played Metalcon and impressed a lot, so having one of their albums I looked forward to seeing them again now. Well that did not disappoint as the same energy as 2017 was still very much alive and the vocalist singing large parts standing on a flightcase was till hooded and powerfull. At the same time instrumentally there was little to complain either and this show flew by, at least to me it seemed shortish. .As Jonathan shouted along with the title, the only song I can confirm they played was The Silent Death of Cain. Rene told me that some years ago they even played at de Vinger, when still in the centre. I would have no problems with an annual return of them to our beautiful city behind the dunes. 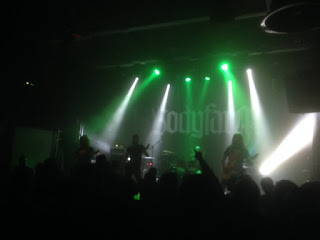 After what for me was the highlight matters would change with next band Human Error playing Slam Death. Well being only three consisting of drums, guitars and vocals the noise coming of stage was nothing less but impressive. Still the songs were a style where I almost have to surrender. For me the words describing this best were different and interesting, which does not need to be positive always. At the same time the pits grew and the crowd became louder. Not musically my thing really I liked their presentation and they gave us a crocodile show. Hereafter Bodyfarm would for me close the festivval. I saw this band from Amersfoort before and liked them at BOA 2016. After the slam experience returning to some more grooves and songs was welcome to my ears. A fine closure of the day showing that Holland has many class bands in the extreme genres. For next year the first band was already announced in Bleeding Gods. This means the festival shall continue which was right based upon decent audience numbers. Let's see if any non-death metal bands shall be included, or otherwise I just pick a favorite part again. For a first time organization seemed very smooth to me and even the Polish hip-hop crowd coming for the other hall seeemed to blend in calmly at the bar.
Posted by erikprogtricolor at 12:24