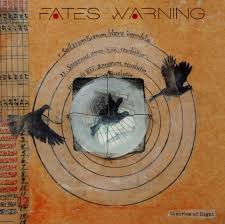 I don't believe in the question: "What's your favorite band?". This can only be answered in my eyes by non music lovers. Everyone I know that considers music as very important in their lives shall always try to negotiate at least a top five. I would not even know where to start when looking for the answer. Still if ever threatened under gunpoint to name my favorite band (what are the chances for that happening??) chances are I would shout out Fates Warning.

Now they released their new album "Theories of Flight" and before heading for holidays tomorrow a quick word is deserved. My aim is modest, but if one person reads this and decides to look for more info or clips of this album my target is achieved. The internet is already full of reviews and what I noticed that generally this is considered to be one of their best albums ever. Special recommendation from me would go to The Man of Much Metal. His reviews are always very extensive and informative. He also follows the same range as I do going from Frost* and Cosmograf to Fallujah and In Mourning. Maybe I should say hallo to him once at next Progpower Festival for instance.

I did not yet have the time to form any such opinion, but I do realize that we have a wide range from short and heavy to epic long tracks again. Ray Alder is in top form and I did not discover any song falling below the standard they have set themselves here. Frank Aresti is not officially in the band, but added some solo's so I guess he joins them live as well. Fates Warning can not really do any wrong with me and this album just proves again why. Queensryche has been off the road of good albums for a while, Dream Theater have been repetitive before and strange this year, but Fates Warning just does not have disappointment written in their dictionary. One of this year's highlights and waiting for the tour by Progmetal's greatest founding fathers.